In probate court papers obtained by The Sun, Richard executed a Last Will and Testament on March 22, 2021, naming his “friend” Diann Bankson as the executor of the will.

Diann is Frank’s ex-fiancee, as the two have had an on-again, off-again relationship for decades

The court papers read: “I give all my tangible personal property and household effects not otherwise effectively disposed of, such as jewelry, clothing, automobiles, furniture, furnishings, gold and silver, books and pictures, including policies of insurance to Diann Bankson.”

If Diann did not survive him, her daughter would be the executor.

He explained how his biological son passed away and had no surviving descendants. 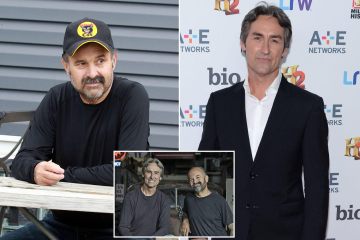 As for his daughter, he wrote: “Since she has had little or no contact with me in recent years, and lives in California, and does not visit me, it is my expressed intention, desire and direction that neither [my daughter] nor any of her descendants shall be entitled to any part whatsoever of my estate or any proceeds and/or assets of my estate.

“I sincerely wish them a happy life, I just wish they had taken the time to remain in contact with me.”

Diann is able to invest or sell his real or personal property.

She filed papers to accept the position as the executor of the will.

Richard did not mention Frank in the will, despite marrying his mother Susan back in 1974.

Susan passed away in 2013 and was still married to Richard at the time of her death at age 67.

Mike, 58, who had a falling out with Frank, was the one to inform fans of his stroke.

He captioned an Instagram photo of the reality star: “I have been very private in the past year in regards to Frank’s life and the journey he’s been on. There has been lots of opinions in regards to mine and Frank’s friendship and the show but now is not the time to set the record straight.

“Now is the time to pray for my friend. Frank has suffered a stroke and is in the hospital.

“Please keep him in your hearts and thoughts. Frank I pray more than anything that you make it through this okay. I love you buddy.”

The Sun obtained the 911 call placed by Frank’s friend from the star’s Iowa farmhouse on July 14 just before 11am.

The friend said: “I just showed up at my friend’s house here and he was sprawled out on his floor. He can’t speak to me. He might be seizuring [sic] I’m not sure.”

Frank and Diann dated on-and-off for years before their relationship ended, as both accused the other of infidelity.

As The Sun previously reported, Diann sued Frank for negligence on January 27, 2020.

Diann revealed she and Frank were engaged in 2017 and were living together in his Iowa farmhouse.

In November 2018, she “walked in and caught him in bed with another woman.”

After the two reconciled, she claimed an incident took place at the farmhouse when Frank and a friend set off fireworks.

Diann claimed the men “had been drinking” at the time, as she went into the home while they lit the fireworks.

She continued in the court papers that the men were unable to light a firework.

Diann alleged: “Both defendants then put it in a closed cylinder vintage ashtray and tried to light it there. The firework did not light again and the Defendant just left it in the covered intake ashtray instead of properly disposing the firework.”

She then claimed that she wasn’t warned about the ashtray, as she used it while smoking a cigarette.

The lawsuit continued to claim: “The ashtray blew up severely burning her hand and arm with third-degree burns and burnt off eyelashes and eyebrows.”

She claimed Frank “refused” to “take her to the hospital” and instead told her to “toughen up.”

She went to the hospital in the following days and was “treated for third-degree burns.”

When the couple split again, she claimed he had the locks changed on a separate Iowa home they shared.

Diann demanded $50,000, claiming Frank was “negligent in the operation of fireworks.”

She claimed she has experienced pain and suffering, emotional distress and mental anguish, past and future loss of function of body and scarring, loss of earning capacity, loss of normal life and medical expenses.

In a previous interview with The Sun, the American Pickers star insisted Diann is the one who was unfaithful, as he even got a tattoo to remind him of her “betrayal.”

He told The Sun: “I was going to get married, I bought a house and a big expensive ring, and then I find out my fiancée had been dating somebody else for two and a half years.

“She’s the cheater, that’s why I got a tattoo saying ‘Once a cheater always a cheater.’ I got the tattoo two years ago just to remind myself not to make the same mistake again. She cost me six figures.”

He continued to claim: “She was cheating a lot longer than me. I had someone over at the house, but that’s all it was. She didn’t catch me in the act, it was nothing like that.”

Frank and Diann have a long history, as they dated when he was 25, again at 35 and then a final time at age 55.

He said: “You’d think I would have learned, she cheated each time. I don’t think she can help herself.

“I do not need to spend one minute of my day thinking about anything to do with her. I’m no angel, but neither is she.”

Diann exclusively responded to The Sun of Frank’s cheating claims, as she insisted: “It’s not true what he’s saying. If he’s trying to make me look like the bad person of course I’m going to say it’s not true, because it’s not.

“The bottom line is that I know the truth and that’s all that matters. He’s playing the victim and it’s not true. I wasn’t cheating on him at all, I was waiting here every two weeks when he was on the road, waiting for him to get home.

“I just want to move on because every time I think about it I get a little upset, I get hurt all over again and I can’t keep doing this.

She concluded: “I don’t care to have drama or chaos in my life, I’m just trying to heal right now. It’s been two years, I’m ready to move on.”

Frank last appeared on American Pickers during a March 2020 episode, as he took time off to recover from back surgery.

The original cast member’s firing was announced in July 2021 despite his desire to return to the History show.

Frank left the show to recover from grueling back surgery that left him with 185 stitches and two rods in his spine.

During his time off the show, Frank lost 65 pounds and was sober from alcohol.

Frank also told The Sun that he checked into rehab for alcohol abuse in Iowa for 77 days.

Frank said last year: “I went to rehab and I’ve been sober now for 11 months.

Frank continued that he went to meetings “twice a week” after the stint.

He added: “I don’t think I’ll ever have a drink again because I don’t like the feeling anymore and some of the dumb things that I did.”

Frank continued: “I’m feeling really good. Life is good and I’d like to get back into the swing of things. I wish I had done it five years ago, I would have been a different person.

“It was the best thing for me and I wish I had done it sooner or I wouldn’t be in the position that I am right now.”

“I haven’t talked to Mike in two years. He knew my back was messed up, but he didn’t call me up and ask how I was doing. That’s just how it is,” Frank previously told The Sun.

“The show is tilted towards him 1,000 percent. I can’t even bend that far down to show you how much.

“That’s fine. It’s like you’ve got Aerosmith and there’s Steven Tyler and he’s the frontman. I found my spot, I’m second and he’s number one on the show. That’s no problem with me, maybe he does have a problem.”

He even admitted: “I think Mike wants to get his brother Robbie in there to replace me. I don’t know why he’s behaving like that towards me.”

Fans have slammed Mike for being “fake” for asking for prayers despite their years-long feud.

As The Sun previously reported, Frank was in talks for a spinoff show before the stroke.

In May, rare photos of the reclusive star were posted in the Frank Fritz Fans Facebook group.

In the pictures, Frank looked happy and healthy as he smiled big next to a fan.

A member captioned the series of photos: “This was from yesterday when Frank ‘picked’ his Corvette up from my buddy Mike’s shop after repair. He sat and shot the breeze for three hours or so. It was a blast. Great guy!”

The fan claimed Frank “will never go back to American Pickers.”

The member continued: “He is trying to get a show about nostalgic car restorations with a story behind them in the works.”