Cricket WAG Candice Warner has become embroiled in a public spat with a prominent journalist who questioned her husband David’s decision to snub the Big Bash League this summer and potentially secure a $2.1million payday in the UAE.

Reporter Daniel Brettig tweeted Warner, 35, should retire from international matches if he asks Cricket Australia for a No-Objection Certificate (NOC) in order to play in the lucrative UAE T20 League from January.

It will need to be signed off by CA before Warner inks a mega deal abroad.

‘Pretty simple for Warner. If he genuinely wants to play in new UAE league in peak Australian summer in January then he needs to retire from international cricket,’ Brettig wrote on Twitter.

‘CA would be making an extraordinary and unprecedented concession to give him an NOC unless he does that first.’ 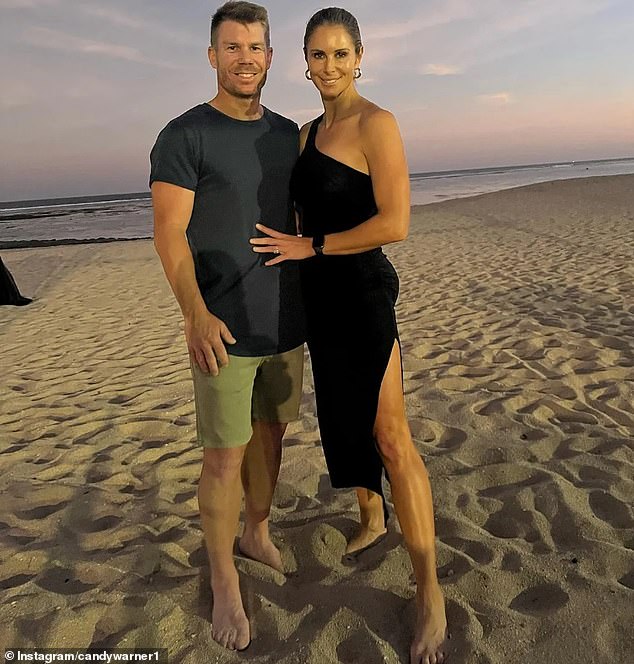 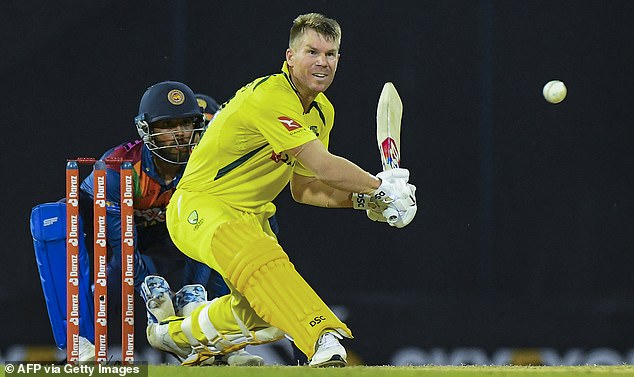 Reporter Daniel Brettig tweeted Warner, 35, should retire from international matches if he asks Cricket Australia for a No-Objection Certificate (NOC) in order to play in the lucrative UAE T20 League

A fired up Candice Warner hit back at Brettig, stating: ‘Do you genuinely believe this? You’re having a laugh.’

Brettig then replied: ‘It’s not a case of what I believe. It’s more about how the NOC system works so that international cricket isn’t consumed by privately owned T20 leagues and clubs.’

The dynamic opening batsman hasn’t played in the BBL since 2013 – and last year Mrs Warner revealed he is unlikely to ever play again on local shores due to a lifetime leadership ban imposed by Cricket Australia.

Warner can’t hold a leadership position at any level of Australian cricket for his role in the ball-tampering scandal in South Africa back in 2018.

‘I think it would almost be commercial suicide for them (Cricket Australia) to allow a player like him (Warner) to go head-to-head up against their own competition,’ he told SEN Radio. 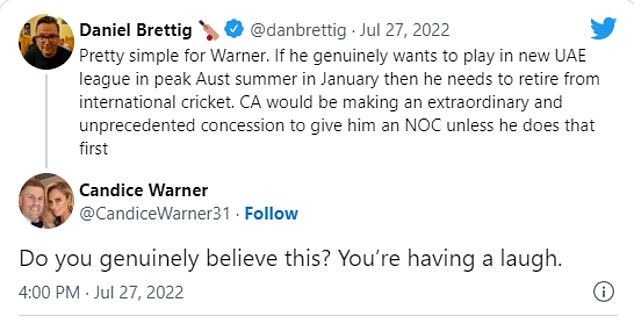 Mrs Warner responded to cricket journalist Daniel Brettig on Twitter after he criticised her husband, asking if the reporter was ‘having a laugh’

‘They can’t force David Warner to play in the BBL, I understand that, but to let him then go off (to the UAE)…would be dangerous.

‘If (Warner) rides off into the sunset and says, ‘sorry Australian cricket, I’m going to become a gun for hire, you can’t question that, that’s his prerogative.

‘My concern is when younger players then come in (and ask for a NOC)…that is when it will be really challenging.’

The UAE league is backed by the powerful BCCI in India, with a number of teams owned by IPL franchises, including the Mumbai Indians, Kolkata Knight Riders and Delhi Capitals.

The new competition is reportedly offering three-year contracts worth $2.1million for players to join.