Huzzah! The most ludicrous, least historically accurate and plain silliest costume drama in the annals of television has come swaggering back.

Tony McNamara’s wildly improbable version of the Empress Catherine’s reign over Russia in the 18th century, The Great (C4), returned with a trademark tableau of children playing football with a human head amid the ruins of a burned-out palace.

Catherine (the fiery-cheeked Elle Fanning) delivered a lecture fit for social media on the importance of kindness and the value of every human life. The children swore back blithely at her.

When this show launched two years ago, no one knew what to make of it, least of all the actors. It was a confused mess of farce, sex scenes, political intrigue, historical re-enactment, emotional drama and spectacular set pieces. 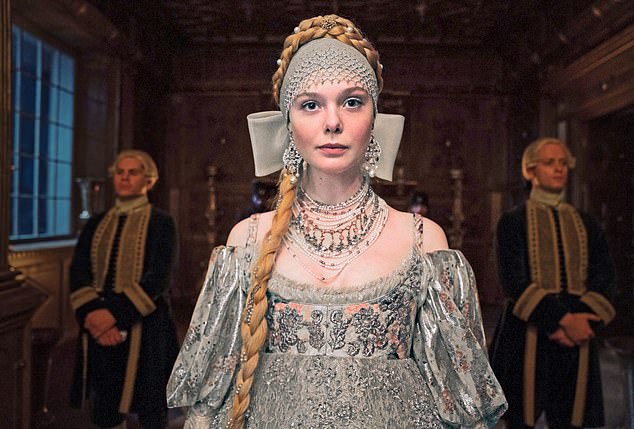 Whatever the writer’s intentions, it now seems that the cast of The Great are playing it for laughs – and the show is far better for it. Pictured: a fiery-cheeked Elle Fanning as Catherine

Whatever the writer’s intentions, it now seems the cast are playing it for laughs — and The Great is far better for it. Douglas Hodge, as the old general Velementov besotted with his queen, rolled around on the floor like a grandpa playing games with toddlers, as he pretended to suffer an angina attack during a duel.

Julian Barratt, meanwhile, joined the cast as a supercilious doctor with a pervy streak, and immediately found himself smuggling the emperor past armed guards in a drinks cabinet on wheels.

And when Peter escaped as the palace burned (an opportunity to terminate characters from the first series whose purpose was served), Catherine’s soldiers were easily able to track him — because he sent an underling back to collect the mummified corpse of his mother.

Amid the madness, a suspicious viewer might wonder whether actual nuggets of historical fact are concealed. A servant placed a frog on the empress’s pregnant belly, supposedly a Russian folk remedy against miscarriage.

And though the script is mostly foul language and twee platitudes, the occasional bit of pith does slip through. ‘If God really loved women,’ Catherine complained to the frog, ‘we’d lay eggs.’ 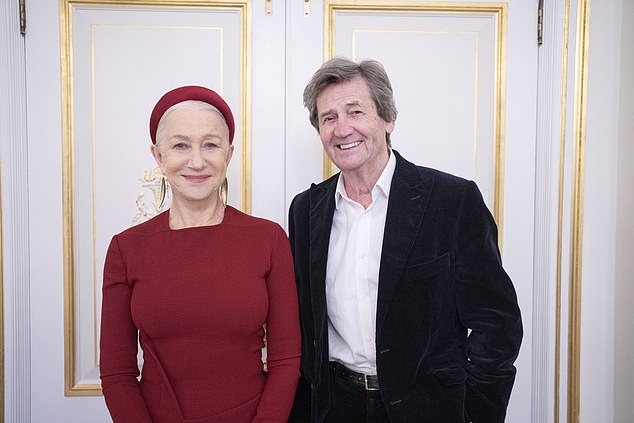 What a joy to witness an intelligent conversation between Melvyn Bragg (right) and Helen Mirren (left), writes CHRISTOPHER STEVENS of The South Bank Show on Sky Arts

Helen Mirren played a more credible but less entertaining version of the monarch in 2019’s Catherine The Great on Sky Atlantic. But interviewer Melvyn Bragg avoided touching on this in The South Bank Show (Sky Arts), preferring to concentrate on her splendid career in theatre.

Mirren did lament she’d never played in Chekhov, a particular regret as her grandfather was from the Russian nobility. What we really wanted to hear, though, were insights into how she prepared to portray Elizabeth II in Peter Morgan’s 2006 film The Queen, opposite Michael Sheen as Tony Blair.

Helen didn’t disappoint. ‘When I was asked, this was long before The Crown,’ she said. ‘I thought: “Are you allowed to do that?”’

Searching for the human being behind the regalia, she imagined ‘the person Elizabeth Windsor as a submarine, watching the world through her little periscope which is the Queen’s eyes’.

The dialogue became enjoyably testy as Melvyn’s flattery missed the mark. ‘What got me completely,’ he said, ‘was the interiority that came through your performance.’

‘Is there such a word?’ she retorted, ‘or have you just made it up?’

‘There is now,’ Melvyn growled. ‘You have an interiority complex!’

What a joy to witness an intelligent conversation, not one consisting of pre-packaged anecdotes and toilet gags like every other current chat show.

Faux forester of the week: George Clarke visited a sustainable woodland to watch a 50ft beech being felled, on his Remarkable Renovations (C4). As the tree toppled, George couldn’t resist shouting: ‘Timber!’ Altogether now . . . He’s a lumberjack and he’s OK.