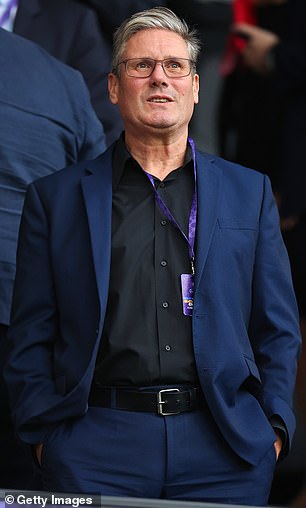 Sir Keir is pictured watching the Lionesses in their Euros semi-final against Sweden on Tuesday night at Bramall Lane, Sheffield

Desperate to be heard over the din of the Tory leadership contest, Sir Keir Starmer has sought to portray the Government as riven with dissent and petty infighting.

In fact, so pious have his denunciations been in recent weeks one might have assumed that Labour is one big, happy family.

But as the party continued to tie itself up in knots over yesterday’s misery-inducing rail strikes, we know the reality is in fact the opposite.

Twice this week Sir Keir has ordered his MPs not to join striking rail workers. Yet with a defiance bordering on belligerence, many decided to ignore his demands and joined picket lines anyway.

Among them was Sam Tarry, a transport spokesman who was one of Sir Keir’s front bench team. Mr Tarry has now been sacked, but he has surely left his leader’s authority looking shot.

Sir Keir doesn’t help himself by not condemning the strikes which are causing misery for the travelling public, thousands of whom are simply trying to earn a day’s pay. So much for being the party of the working people!

Meanwhile, his refusal to stand up to the reprehensible behaviour of the grasping unions, which furnish his party’s coffers with millions each year, demonstrates the most extraordinary moral cowardice.

But then what did we expect?

On pretty much every challenge facing the country, be it the economy, the pandemic, immigration or even Russia’s aggression towards Ukraine, Sir Keir has proved himself to be utterly spineless, carping incessantly from the sidelines about the Government’s policies while at the same time offering up no plan or alternative solution.

Sir Keir loves to pontificate on the value of political leadership.

But what hope has he got of tackling the monumental issues of the day – let alone Vladimir Putin – if he lacks the requisite guts to keep his own party in order?

One of the more depressing aspects of the financial downturn has been the rise of ‘greedflation’ – successful firms using the cost of living squeeze as an excuse to ramp up prices.

So it was disappointing this week when two great British business institutions, Unilever and Reckitt, announced significant price increases to offset soaring inflation.

The Mail wouldn’t dream of telling these two consumer giants how to run their businesses. We understand the responsibility companies have to their shareholders in maintaining a healthy balance sheet.

But when millions are struggling with their weekly shop, might it be also sound practice for them to swallow some of the costs themselves rather than simply pass them on to customers?

Both firms make vast profits. It’s not as if they can’t afford it.

In any sane world, the disturbing case of Allison Bailey should never have needed to go to court.

As it was, Miss Bailey was forced to take her Chambers at Garden Court to a tribunal after it discriminated against her when she rejected the idea that someone’s biological sex can change.

Time and again trans activists such as Stonewall employ aggressive tactics with people who hold differing views to their own. And far too many large firms are too afraid – or too weak – to face them down.

The decision yesterday to award Miss Bailey compensation is therefore a hugely welcome victory for freedom of expression. We salute her resilience. And her courage.