BURGLARS targeted the family of a Lionesses star while they were watching her help England net a place in the Euro 2022 final.

The gang arrived at the house thinking it would be empty and that all of Georgia Stanway’s relatives were at the match cheering her on.

But the raiders were interrupted and fled empty-handed.

Paul, 56, said: “Bittersweet day. While we prepared for the Euros semis we were devastated to learn that our house was targeted by thieves who expected us all to be away.

“Thankfully they were thwarted by a family member who was unable to travel to the game.” 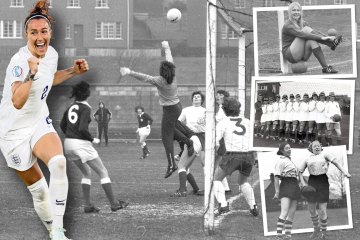 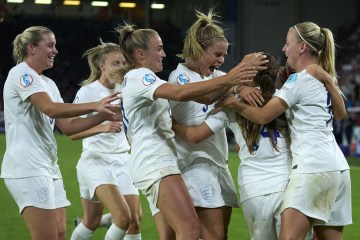 Paul also urged other people in Barrow, Cumbria, to be on their guard and to help identify the would-be burglars

The dad of four said: “Just a little warning to people. Be careful posting about your movements as there are definitely scumbags in Barrow.

“Lock your doors, keep an eye on your neighbour’s property, stay safe.

Two of the gang stayed in the car, while a man in his 20s wearing a Workington rugby top and carrying Ikea bags tried to break in.

The incident, at about 2.30pm, raised concerns that England’s women stars might face a similar threat to millionaire male players whose homes have been raided.

Players have turned to former SAS soldiers to protect their homes after a spate of raids in which gangs stole designer clothing and jewellery worth hundreds of thousands of pounds.

Georgia, 23, has been one of the stars of the tournament and scored a stunning extra-time winning goal against Spain in the quarter-finals.

She credits dad Paul and her mum Joanne — who are separated — with “sacrificing their lives” to fulfil her rise in the sport.

Paul was at the match at a sold-out Bramall Lane with his 48-year-old wife Linzi — Georgia’s stepmum,

Georgia joined Blackburn Rovers’ academy and made a mark as a tenacious, goal-scoring midfielder.

She moved to Manchester City aged 16 and went on to score 67 goals in 186 appearances — making her the club’s all-time top scorer.

Shortly before the Euros she signed for German giants Bayern Munich on a three-year deal.

Georgia joined the Lionesses’ celebrations their win over Sweden by singing and dancing to ABBA.

The Swedish group feature heavily on England’s dressing room playlist before and after games.

Asked what was played after the victory, England goalscorer Alessia Russo said: “It was a little bit of ABBA — there’s always ABBA.”

A peak audience of 9.3million watched the match on BBC1 as England won with goals from Beth Mead, Lucy Bronze, Russo and Fran Kirby.

Sunday’s final is a sell-out, with 7,000 tickets for a Trafalgar Square fan zone certain to be snapped up.

Former England captain David Beckham, 47, was one of the first to pay tribute to the Lionesses.

He said on Instagram: “What a night. Congratulations to the girls.”

He posted an image of full back Rachel Daly in an England cowboy hat, adding the caption: “Favourite picture on a special night.”

Before the semi-final, Becks sent the team a good luck message and praised them for inspiring his 11-year-old daughter Harper.

THE schoolgirl England fan who went viral with her dancing celebrations after the Lionesses beat Sweden 4-0 has tipped the side to go all the way.

Tess Dolan, eight, captured the hearts of the nation as TV cameras showed her moves to fan favourite Sweet Caroline.

And the Manchester United fan, from Knaresborough, North Yorks, reckons the Lionesses will go on to win the final at Wembley on Sunday.

Tess, who went to the semi with mum Samantha, 49, said: “They are going to win, I don’t think anyone can beat them.”

Speaking about her dance moves, she said: “I was watching how the players celebrate, and I wanted to try and copy them.”

Prince William is being lined up to present the women’s Euros trophy on Sunday.

Sources said the royal would be at Wembley and could be joined by his children after revealing daughter Charlotte, seven, was a budding footballer.

THE Lionesses are 8-11 favourites to lift the trophy as Germany booked their place in the final last night.

Alexandra Popp gave Germany the lead over France with a stunning volley before an unfortunate own goal by German keeper Merle Frohms just minutes later made it 1-1 at half-time.

Popp restored the lead in the 76th minute and Germany clung on to win 2-1 and set up a mouth- watering clash with England at Wembley on Sunday.