Germany hero Alexandra Popp claims ‘it doesn’t get any better’ than playing England in the Euro 2022 final at Wembley… as she insists beating Lionesses star Beth Mead to the golden boot is ‘NOT my priority’Alexandra Popp scored twice to send Germany to Wembley on Sunday eveningPopp is tied for the golden boot with Beth Mead, but says it is ‘NOT my priority’ They face Mead’s England in the final and Popp said: ‘It doesn’t get any better’

By Samuel Draper For Mailonline

Alexandra Popp said ‘it doesn’t get any better than that’ after securing Germany’s place in the Euro 2022 final at Wembley against England.

Popp scored twice, once in each half, to give the eight-time champions a 2-1 win over France at Stadium MK in Milton Keynes.

The German captain, who plays her club football for VfL Wolfsburg, was chuffed with the performance over one of the tournament favourites. 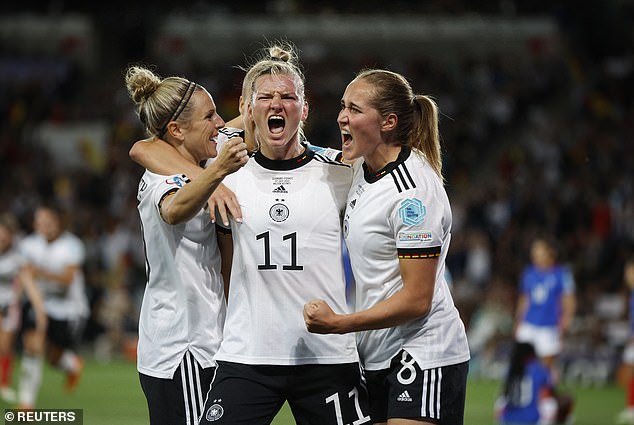 Popp said: ‘I can’t put it into words. We played an amazing game and threw everything in. We are incredibly happy; nobody expected us.

‘We’re in the final at Wembley against England – it doesn’t get any better than that.’

The 31-year-old had missed 10 months of football through a serious knee injury, and only returned to competitive action in March.

She needed to build herself back into the national side, and began the first group game on the bench. However, she scored after being used as a substitute, and has put her name on the scoresheet in all five of Germany’s game so far.

‘We earned our self-confidence in all the games’, Popp added. ‘The team is just great; they have my back and are happy with me after my whole story of suffering. Now it’s time to regenerate quickly.’ 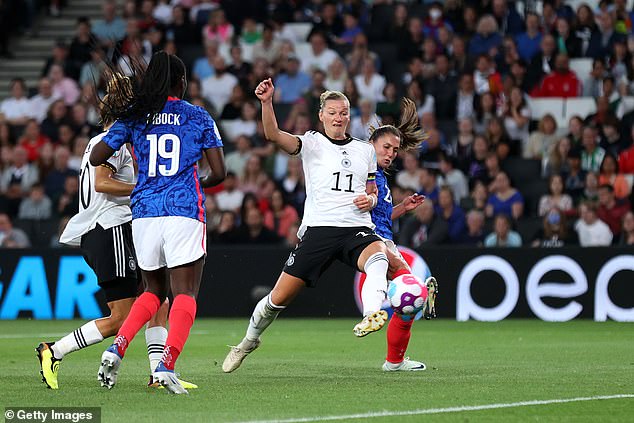 After scoring twice in the semi-final, Popp said the trophy is her priority, not the Golden Boot

Scoring her sixth goal of the tournament 14 minutes from time to take Germany to the final, she is now joint top in the race for the Golden Boot.

She’s level with Lionesses striker Beth Mead – although Mead leads the two at present, because UEFA take assists into account in the event of a tie.

Popp said that her focus was not on the Golden Boot. ‘It’s not my priority; my priority is to win the Euro,’ the striker claimed.

‘If I have the chance to crown the title with that achievement, it would be nice – but if it doesn’t happen, then I’ll still be happy.’

Popp now prepares to lead the Germany side in the final showdown against England – a repeat of the 2009 Euro final, which the Germans won 6-2 in Helsinki.