By Mike Sheen For This Is Money

Maintaining its full-year expectations of little material profit growth on its 2021 showing of £145.6million, Greggs attributed flat growth in the first half to the ‘re-introduction of business rates, increase in VAT and higher levels of cost inflation’. 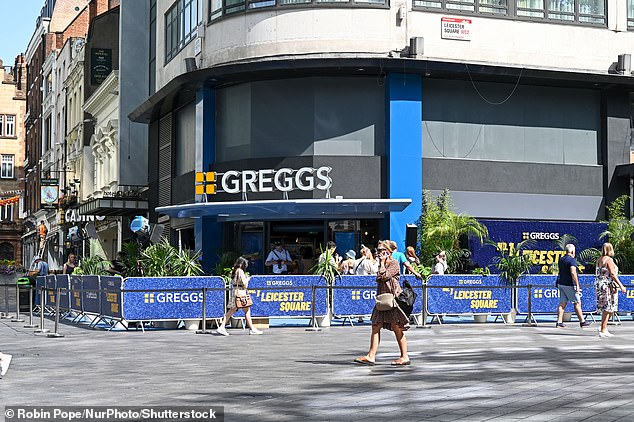 Greggs opened 40 new locations in the first half, including a high-profile Leicester Square store

It comes at a time of record low British consumer confidence, with consumer price inflation at a 40-year high and expectations the figure will be well into double figures by the end of the year.

None the less, Greggs’ balance sheet is strong with a net cash position of £145.7million, having paid a special dividend of 40p per share, at a total cost of £40.6million total, in April. Diluted earnings per share are up from 43.2p last year to 44.8p.

Meanwhile, Greggs opened 40 new locations in the first half, with 12 closures bringing the company to a total of 2,239 shops. A further 150 new shops are expected next year.

Head of equities at Wealth Club Charlie Huggins said the cost of raw materials, energy and wages are all rising rapidly and ‘Greggs is significantly exposed to all three’, though the firm is so far ‘managing these pressures well’.

He added: ‘If Greggs can maintain its recent sales momentum, it will go some way to offsetting inflationary pressures. But the group’s near-term prospects still look rather unappetising given the extremely unsavoury cost outlook.

‘That headwind is probably more or less baked into the share price, but until inflation comes down, Greggs will have to run hard just to stand still.

Greggs maintained its ordinary interim dividend at 15p per share.

Chief executive Rosie Currie said: ‘Greggs delivered an encouraging performance in the first half of the year with sales ahead of 2019 levels. These results demonstrate the continued strength of the Greggs brand and demand for our great tasting, quality and value for money offering.

‘In a market where consumer incomes are under pressure Greggs offers exceptional value for customers looking for food and drink on-the-go.

‘We are well positioned to navigate the widely publicised challenges affecting the economy and continue to have a number of exciting growth opportunities ahead, with a clear strategy for expansion.

‘We remain confident in Greggs’ ability to deliver continued success.’

Elsewhere, Domino’s Pizza Group posted a 16.3 per cent fall in pre-tax profits in the first half to £50.9million on flat group revenues of £278.3million.

The fast food group told investors it expects improved profitability in the second half as the benefit of passing through food cost inflation to its franchises is realised.

Despite rising inflation the group also said it expects to meet previous guidance for full-year earnings.

Investors were less convinced with Domino’s Pizza Group shares down 2.4 per cent in early trading to 284.2p.