GMB‘s Richard Madeley was blasted for being ‘sexist’ and ‘infantilising’ Euro 2022 star Chloe Kelly by nicknaming ‘Coco’ because ‘that’s what he calls his daughter’ during an interview this morning.

The player, 24, spoke to Richard and Kate Garraway on Tuesday’s Good Morning Britain about her historic strike during the final which was followed by one of the most iconic Wembley celebrations.

The English professional footballer revealed she took her shirt off during her goal celebration because a ‘male footballer would be doing exactly the same’ saying it is the ‘best yellow card she has ever received.’

However at the end of the interview, she appeared stunned when Richard told her: ‘Chloe – or ‘Coco’ as I call my daughter Chloe – Coco, thank you very much indeed for coming in.’

Many of those watching were left baffled by the moment, with one writing: ‘Wonder if he’d infantalise one of the Lions in this manner.’ 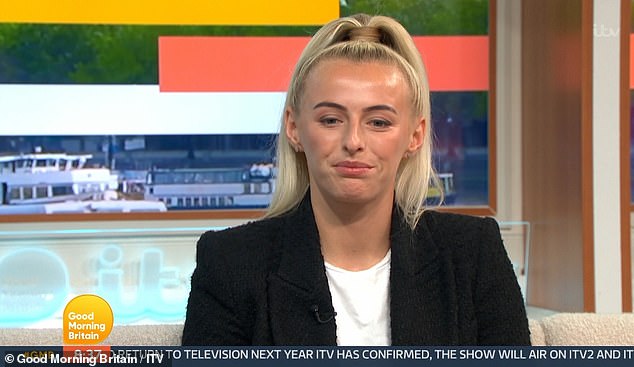 Another commented: ‘Chloe Kelly’s face after Richard Madeley says ‘Chloe – or ‘Coco’ as I call my daughter Chloe – Coco, thank you very much indeed for coming in.’

‘I have to say, I cannot imagine a young male player player who’d just scored the winning goal for England in a final going on TV and being told ‘Colin – or ‘Col-Col’ as I call my son Colin – Col-Col, thank you very much indeed for coming in.’

A third called it ‘patronising’, while another appeared to cringe, writing: ‘Oh lordy!’

Another wrote: ‘She had to bite back a retort. She shouldn’t have to.’ 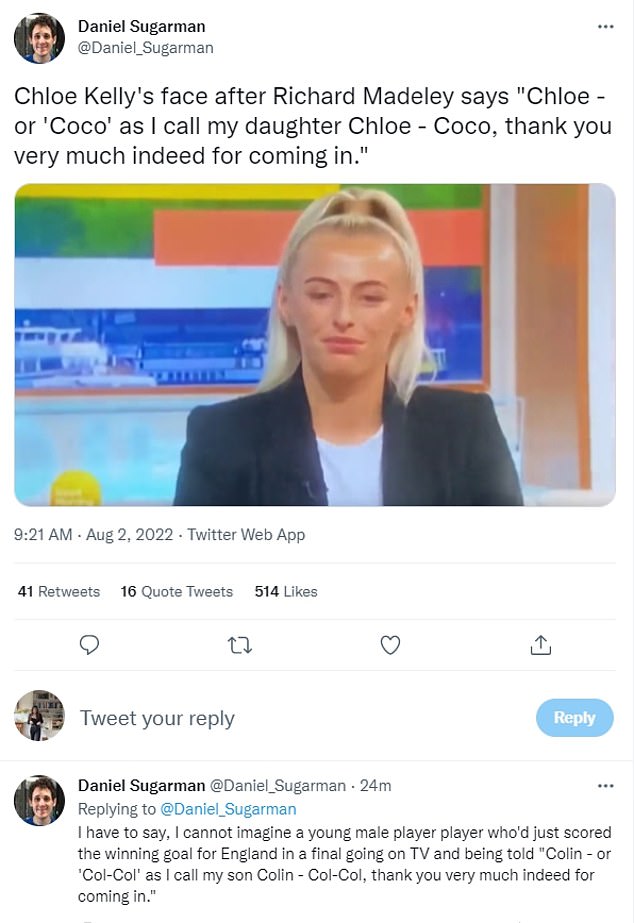 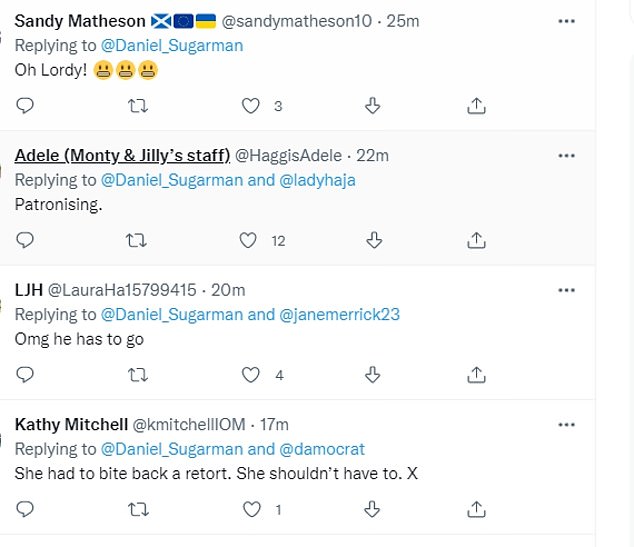 Many of those watching the programme were left stunned by the interaction, branding it ‘patronising and inappropriate’

‘How to get brought down to earth quicker than gravity – be forced to have an interview with this least intelligent of men,’ one commented.

Elsewhere in the interview, Chloe spoke about the moment she scored the winning goal in the match, saying: ’Everything is a blur, you celebrate for what the moment is, not am I allowed to take my shirt off.

’I’m taking my shirt off; I’m going crazy because a male footballer they’d be doing exactly the same so as a woman why can’t we.

‘In that moment every England fan or player you’re an England fan at the moment. It’s the best yellow card I have ever received.’ 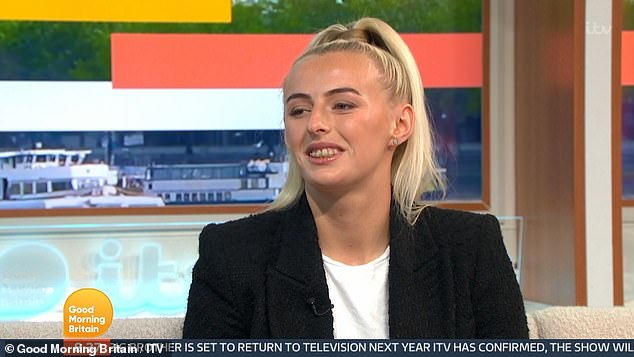 Earlier in the Interview Chloe revealed she is just trying to ‘live in the moment.’

She said: ‘It hasn’t settled in yet. I think I’m just living in the moment and not even really looking at my phone too much because I am living in the now and taking it all in.’

When asked by Kate if it is possible to feel the ‘bigness’ of the moment, Chloe said: ‘While we were in tournament we tried to stay in our bubbled and we didn’t really listen to the outside world.’

She admitted although they believed they would win they ‘never looked to far ahead’ as they just focused on the next game. 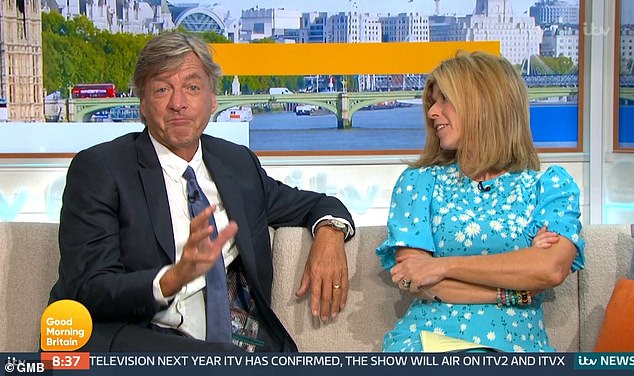 She said: ‘I believe that helped us in the tournament, just focusing on what’s next, the opponent in front of you.’

Chloe told the presenters that she had hoped in having a ‘Zamora moment’ after seeing him score the winning goal in Wembley against Derby County in 2014, which she succeeded during the final.

As a surprise for Chloe football star Bobby Zamora congratulated her via a zoom link into the show.

He said: ‘I am touched to have you speak my name at such an amazing moment you have created the greatest English woman’s football moment ever, you are an absolute hero and a national hero, you should be so proud of yourself.’

Chloe went on to call Zamora a ‘QPR legend’ and said as a fan she could only dream of ‘moments like this.’ 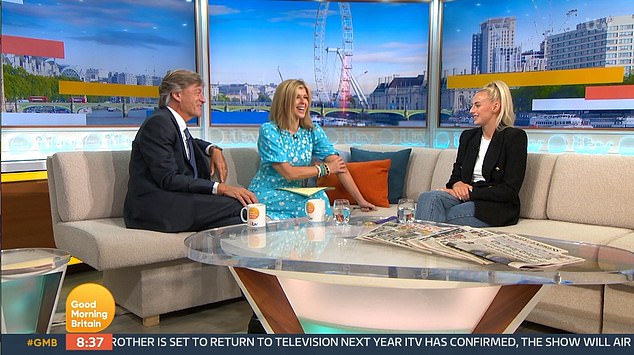 During the discussion, the player, who scored the winning goal of the Euro 2022 final on Sunday night, recalled how it felt playing in the game

Yesterday, fans praised the moment Chloe whipped off her shirt to run across the pitch in her sports bra after scoring the winner in the Euro 2022 final.

It had been a tense 90 minutes with flying tackles and yellow cards peppering a highly-energetic match, watched by Prince William in the crowd.

But the introduction of Ella Toone looked to have settled it after she broke to fizz a shot past helpless German keeper Merle Frohms watched by a record 87,192 in the stadium.

But there was heartbreak minutes later as Magull worked her way into position to equalise, devastating England fans across the country.

With only ten minutes left, the game was left balancing on a knife edge with the ultimate prize at stake. 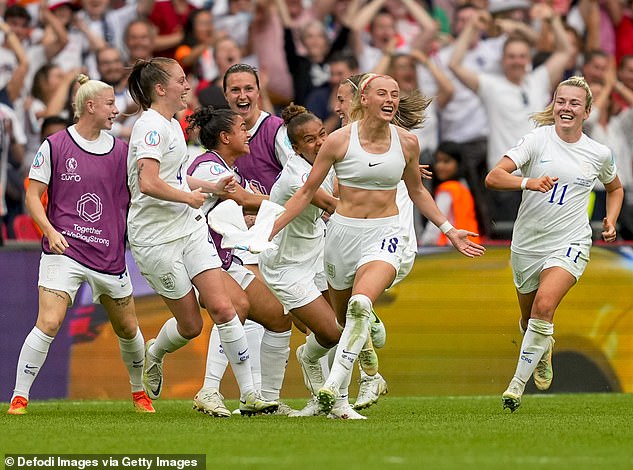 The stalemate could not be broken, going into another agonising 30 more minutes of extra time which at first had produced nothing more.

But Kelly was not about to let the game go to penalties and picked the biggest stage in the world to produce her first ever international goal.

The substitute took her shirt off after poking the ball home from close range and ran around the pitch with her euphoric teammates.

She whirled her shirt around her head in a moment of glorious abandon, as she raced away pursued by ecstatic team-mates.

Many fans went wild over the moment online, with one commenting: ‘Chloe Kelly celebrating her goal in a sports bra is the feminist image of the decade.’