A Republican who voted to impeach former President Donald Trump is ripping into Democrats for propping up his MAGA primary rival.

‘I’m sick and tired of hearing the sanctimonious bulls**t about the Democrats being the pro-democracy party,’ GOP Rep. Peter Meijer told Politico.

The site reported Wednesday on growing discontent among the Democratic ranks over the Democratic Congressional Campaign Committee’s decision to meddle in the Republican primaries – boosting MAGA, election-denying candidates over GOP moderates. 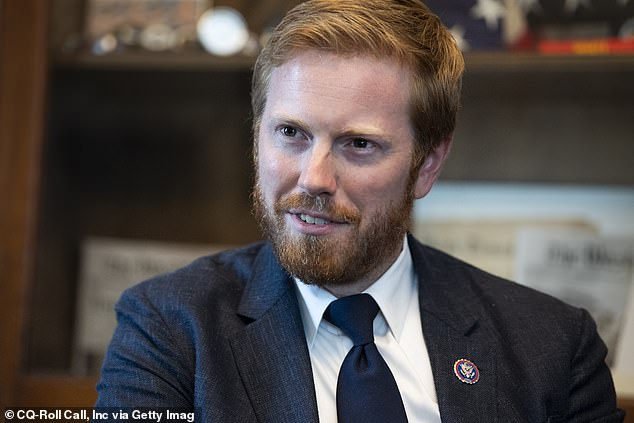 ‘I’m sick and tired of hearing the sanctimonious bulls**t about the Democrats being the pro-democracy party,’ GOP Rep. Peter Meijer of Michigan told Politico for a story out Wednesday. The Democratic Congressional Campaign Committee is running ads that could help his rival 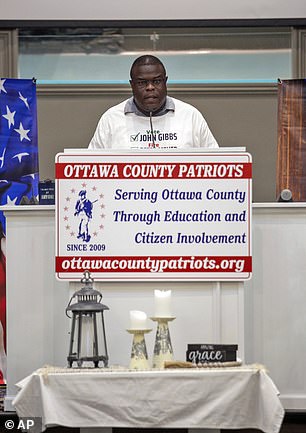 Rep. Peter Meijer is fighting for his political survival as he faces the Trump-backed John Gibbs (pictured) in a Michigan Republican primary next Tuesday

One of those races will come to a conclusion on Tuesday, when Meijer – one of just 10 House Republicans to vote in favor of Trump’s second impeachment – faces John Gibbs, who’s been endorsed by the Republican ex-president, in a Michigan primary.

The DCCC is spending nearly half a million dollars to run ads calling Gibbs ‘too conservative’ and pointing out that he was ‘handpicked by Trump to run for Congress.’

While the ads seem critical, they’re supposed to act as a dogwhistle for pro-Trump Republican voters, raising Gibbs’ profile against the incumbent, Meijer.

‘No race is worth compromising your values in that way,’ Rep. Stephanie Murphy, a Democratic member of the January 6 House select committee, told Politico.

‘Many of us are facing death threats over our efforts to tell the truth about January 6,’ she continued. ‘To have people boosting candidates telling the very kinds of lies that caused Januaru 6 and continues to put our democracy in danger, is just mind-blowing.’

‘It’s dishonorable, and it’s dangerous, and it’s just damn wrong,’ he told Politico, adding that the Democrats were hastening the GOP’s disposal of ‘truly honorable and courageous Republicans.’

Rep. Tim Ryan, running for his state’s open U.S. Senate seat, said Wednesday afternoon on Fox that ‘playing in these primaries is really disconnected from what average people are going through.’

Republican Rep. Adam Kinzinger – a fellow January 6 committee member, who voted in favor of Trump’s impeachment – called the move ‘disgusting’ and said he, too, feared antics like this would hollow out the Republican Party.

‘You’re going to have election deniers win. So while I think a certain number of Democrats truly understand that democracy is threatened, don’t come to me after having spent money supporting an election denier in a primary, and then come to me and say, “Where are all the good Republicans?”‘ he told CNN Tuesday.

A reporter tried to ask White House press secretary Karine Jean-Pierre about Democrats spending money on MAGA candidates Tuesday, pointing out President Joe Biden had said Monday that ‘you can’t be pro-insurrection and pro-democracy,’ but she wouldn’t speak directly to the question.

Even without Democratic meddling in the GOP primary, Meijer would have a tough re-election bid.

After redistricting, his district has become much friendlier to Democrats.

Democrats have again picked Hillary Scholten, a former Department of Justice attorney, as their candidate.