A woman has fiercely split opinion online after asking people whether they think house guests should remove their shoes.

The anonymous poster took to the British parenting forum Mumsnet to ask for people’s thoughts on the contentious issue.

She received a range of replies from posters who did not hold back. Some said they believe it is impolite not to remove your shoes automatically when going to someone else’s home.

Others said that asking people to remove their footwear is ‘unwelcoming’, and prioritises the floor over guests’ comfort.

And some feel the division is based along class lines, with working and lower middle class people more likely to be proponents of the shoe removal policy. 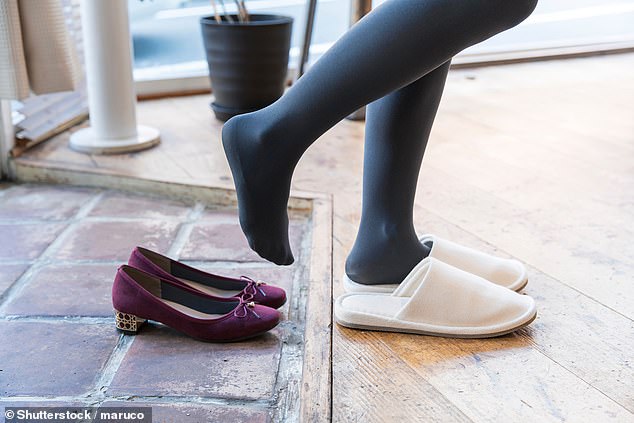 Writing on Mumsnet, the poster said: ‘[Am I being unreasonable to ask visitors to] Remove their shoes. I have very pale cream carpets and no one in the household wears shoes in the house.

‘My niece recently called and it was heavily raining, she had cork sole shoes on which sucked up lots of water which she tramped over my carpets.

‘I asked her to take them off as wet soggy prints were being left behind. I do not have to ask some people but feel awkward when I do ask.’

For a number of posters, removing their shoes upon entering their own (or other people’s) homes is ‘automatic’, with many citing dirt as the reason

Lots of people agreed with the poster, saying they too have shoe-off policies.

One wrote: ‘I live in the UK and don’t know anyone who has a shoe on policy. The thought of all the c*** outside being trodden through houses (and we have hard floors) makes me feel a bit ill. Especially here in London – so much dog and fox poo!!’

Another added: ‘With my family I just say shoes off!!! And they do it but with my in laws I stare at their feet and if they then don’t get it I say can you take your shoes off please!

‘My partners grandfather out right refuses to take his shoes off in anyones home and has even said to me “that’s what you gave wooden floors for it’s easy to clean” as if that makes any difference? We sarcastically battled each other at his last visit and he hasn’t come back in months.’

And a third said: ‘I didn’t know people still wore shoes in the house, certainly not other people’s houses. First thing I do when I get home, or go to someone’s house, is take off my shoes, it’s automatic.’ 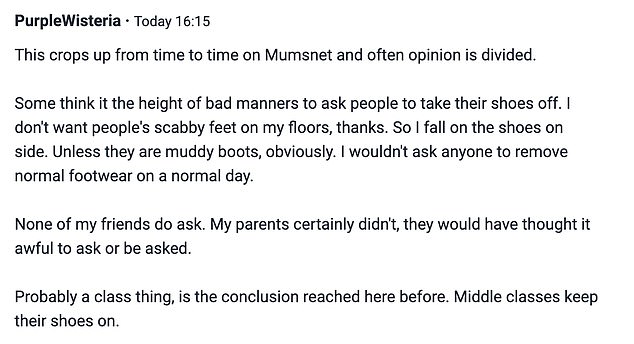 Some people felt that it is the ‘height of bad manners’ to ask people to remove their shoes, while others pointed out that they don’t want other people’s unshod feet in their house

However, many disagreed, and felt equally strongly about their own point of view.

One wrote: I hate ‘shoes off’ rule, it’s unwelcoming. Don’t have light coloured carpets if you’re that worried! Carpets like that get grubby despite all this shoes off nonsense! They are dirt magnets.

‘If you must insist on such a silly rule, let your visitor know in advance so that they can bring slippers. I hate having to take my shoes off and walk around in my socks, looks b***** ridiculous. Or get some biodegradable shoe covers.’

Another added that they also hated the shoes off rule, writing: ‘Me too, and I’m extremely houseproud, and have cream carpets downstairs. I would only ask people to take shoes off if they were obviously filthy / muddy. We used to have neighbours who would go to take their shoes off when they came round, but I insisted they kept them on! I don’t want to look at your feet or holey socks thank you.’

And a further commentator added: ‘I’m team shoes on. I think it’s incredibly inhospitable and could never ask guests to remove their shoes. Getting floor coverings that can’t be walked on seems ridiculous to me. We have pale carpets on our stairs and landing, never ask anyone to take shoes off although we do ourselves for comfort. Never had an issue.’ 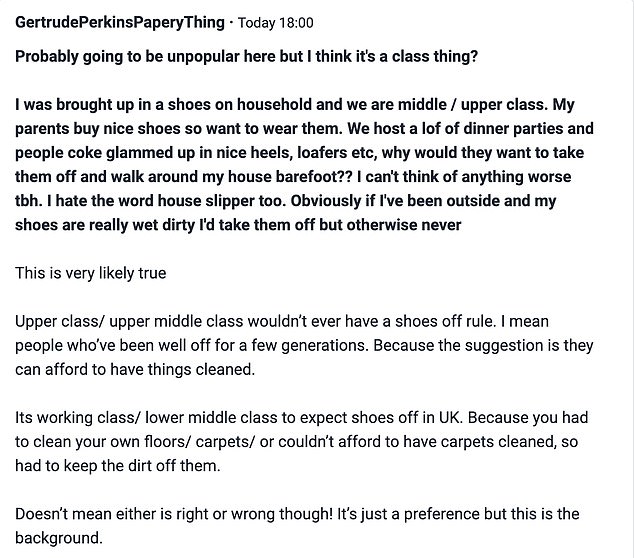 Meanwhile others felt that people’s allegiance to either the shoe-on or shoe-off mentality was related to social class, with lower classes typically more in favour of removing footwear

Some commentators suggested that the divide may be due to class, with shoe removal being the preserve of the working and lower middle classes.

One wrote: ‘My conclusion from reading hundreds of these threads is that shoes off is predominately a lower middle class thing.’

Another agreed, adding: ‘As discussed, it’s definitely a class thing. Hence understanding the etiquette surrounding this.’

And a third explained: ‘I think many are missing the point – middle/upper class people may well wander around their own homes with no shoes. But it’s very bad manners to ask people to remove their shoes.

‘However, it’s also polite to ask when you arrive at someone’s house whether they prefer you to have shoes on or off. So if everyone was polite and well mannered there would never be a problem.

‘The argument about putting your floors above your guests comfort stands.’