Rogan expressed his concerns Tuesday on his podcast, The Joe Rogan Experience, alleging the popular social media site can easily gain access to ‘all the things you have filed away on your phone.’

He also accused Bytedance, the app’s parent company, of monitoring users’ keystrokes and knowing ‘every f***ing thing you type.’

Rogan’s remarks come as mothers on TikTok are removing pictures of their children after raising concerns about the amount of videos of the youngsters that are being saved by potential pedophiles online.

U.S. government officials have believed TikTok ‘is spying’ on Americans for quite some time and are urging Apple and Google to remove the platform ‘from their app stores for its pattern of surreptitious data practices.’ 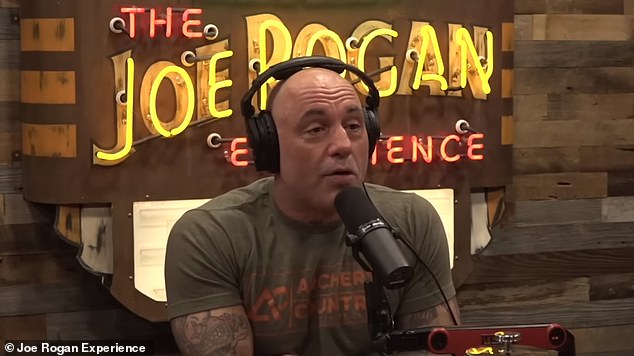 Joe Rogan blasted China-owned TikTok over it’s ‘crazy’ terms of service on his podcast Tuesday, alleging the platform serves as a way for the Communist Party to harvest private data 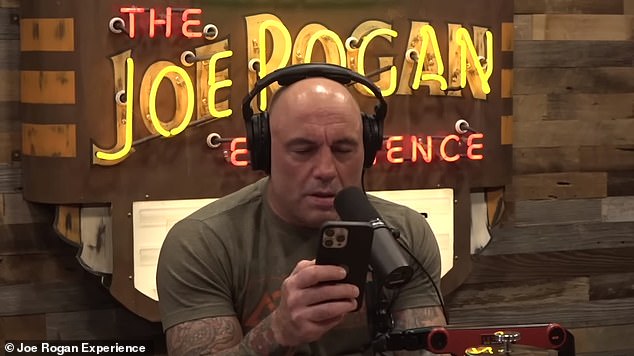 Rogan has been in the news for a plethora of comments recently, which have included him joking that homeless people in Los Angeles be shot and that he’s a ‘bleeding heart liberal’ on many issues

‘I read TikTok’s terms of service, I went down a TikTok rabbit hole yesterday…This is so crazy,’ Rogan told his podcast guest, comedian Theo Von, Tuesday.

‘Is it good or bad?’ Von asked, to which Rogan exclaimed: ‘Bad!’

‘Listen to this, this is from TikTok’s privacy policy,’ Rogan read. ‘It said, “We collect certain information about the device you use to access the platform, such as your IP address, user region.” This is really crazy.’

The podcaster alleged that TikTok created its app just so the Chinese government can spy on people across the globe.

‘It’s insane… Do you think they created TikTok just on purpose to have all that?’ Von questioned.

‘100 percent,’ Rogan responded. ‘I think they saw that people are addicted to social media and created the most addictive version of social media – which is TikTok. It’s the best at sucking people in.’

‘Just tell me how it ends man,’ Von said.

‘It ends with China having all of your data,’ argued Rogan. ‘User agent, mobile carrier, time zone settings, identifiers for advertising purpose, model of your device, the device system, network type, device IDs, your screen resolution and operating system, app and file names and types.’

‘So all your apps and all your file names, all the things you have filed away on your phone, they have access to that.’

‘File names and types, keystroke patterns or rhythms. So they’re monitoring your keystrokes, which means they know every f***ing thing you type.

Rogan, reading the app’s terms and conditions, continued: ‘Battery state, audio settings and connected audio devices, where you log in from multiple devices, we will be able to use your profile information to identify your activity across devices.

‘We may also associate you with information collected from devices other than those you use to log into the platform.’ 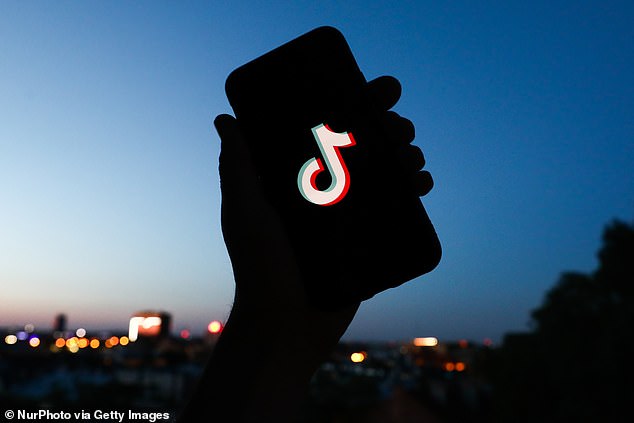 ‘What’s going on in China, I don’t know if you’ve seen this, but they pulled tanks in front of banks to stop people from f***ing rioting because they just took all their money,’ Rogan told Von.

‘They have shut down people’s accounts and they’re doing a social credit score system and they have digital currency.’

He then accused the country of weaponizing its digital currency to control citizens.

‘If you see what’s going on over there, with the digital currency, what they have is the ability to tell you, you can’t buy gas,’ he explained.

‘Like, “Hey Theo, we don’t like the way you’re living your life, so you’re not going to be able to buy a plane ticket,”‘ Rogan said.

‘China’s just dumb, man,’ Von responded. ‘It has cool people and I like some of the food but I don’t like the way they’re doing it all.’

Von then questioned: ‘Do you think the people there even know what freedom is anymore? Or do you think they’re just so brainwashed?’

‘They’ve never had freedom like we have, so no,’ Rogan stated. ‘They weren’t even capitalist for a long time. It was a communist country and then they realized “you know what, in order to compete, we gotta loosen this up a little bit and let some people get greedy and make a s**t load of money.”

The podcaster then argued the Chinese government currently utilizes a ‘hybrid of capitalism and communism’ to run its country.

He argued people are allowed to get wealthy if they work in conjunction with the government.

‘Every business that exists in China – you are an arm of the government,’ he stated. 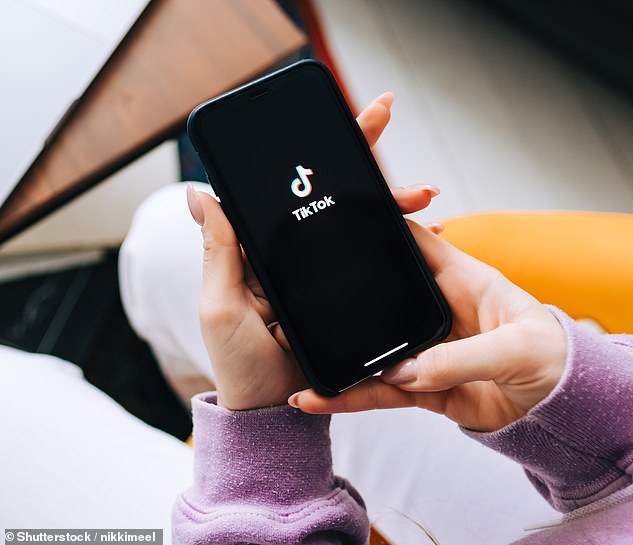 The letter was addressed to nine Republican Senators who raised concerns about privacy data following a recent BuzzFeed News investigation that found such issues.

It does not clearly state U.S. user data has been or can be accessed by employees outside of the country, but it answers 11 questions that the senators requested answers to by July 18.

‘[W]e are confident that when you review our responses, you will see that TikTok has not, at any point, misled Congress about our data and security controls and practices,’ Chew wrote.

However, the CEO wrote that the ‘allegations and insinuations’ from the BuzzFeed News article are ‘incorrect and are not supported by facts.’

The BuzzFeed News report, published on June 17, claims to have listened to leaked audio of more than 80 internal TikTok meetings.

The recordings, which were captured from September 2021 through January 2022, include 14 statements from nine TikTok employees who met to discuss ‘Project Texas’ – the classified effort to stop engineers in China from retrieving the data. 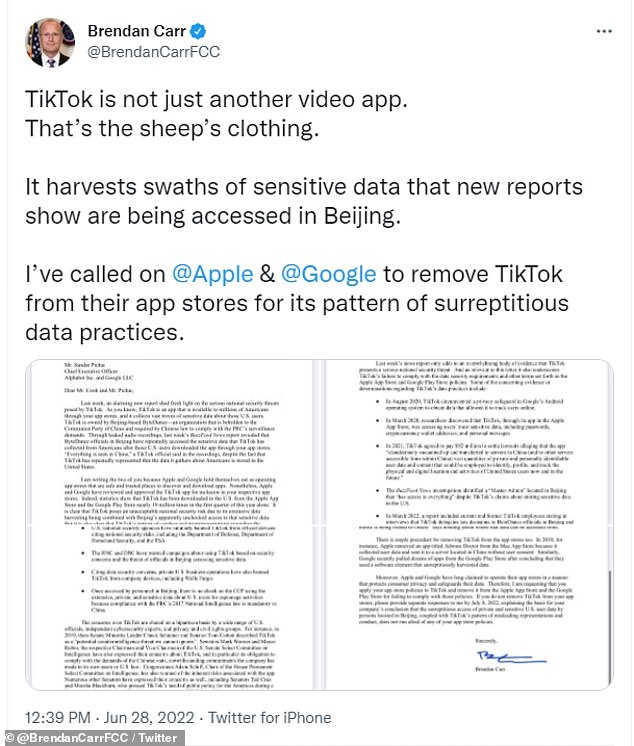 On June 28, Brendan Carr, commissioner of the Federal Communications Commission (FCC), posted on Twitter urging Apple and Google to remove TikTok ‘from their app stores for its pattern of surreptitious data practices

An audio clip is of a director at TikTok who referred to a ByteDance engineer as a ‘Master Admin’ who ‘has access to everything’, according to BuzzFeed News.

One of the 11 questions in the Senators’ letter asked if China-based employees have or had access to US user data, which Chew said such staff ‘can have access.’

This is possible through a series of robust cybersecurity controls and authorization approval protocols, according to TikTok’s letter.

Chew reiterates the implementation of Project Texas, noting that this program was specifically designed to stop such access.

Chew also tells the senators that TikTok’s algorithm will only be trained on data from the Oracle storage and the company will ‘ensure appropriate third-party security vetting and validation of the algorithm, he wrote.

‘Americans need to know that if they are on TikTok, Communist China has their information. TikTok needs to come back and testify before Congress,’ she said.

US government officials have believed TikTok ‘is spying’ on Americans, but they cannot ignore the issue now that BuzzFeed released its report.

On June 28, Brendan Carr, commissioner of the Federal Communications Commission (FCC), posted on Twitter urging Apple and Google to remove TikTok ‘from their app stores for its pattern of surreptitious data practices.’

Carr included a letter to Google CEO Sundar Pichai and Apple CEO Tim Cook, expressing why TikTok needs to be removed, citing a report from last week that ‘shed fresh light on the serious national security threats posed by TikTok.

He is giving the tech giants until July 8 to remove TikTok or explain why they chose not comply. 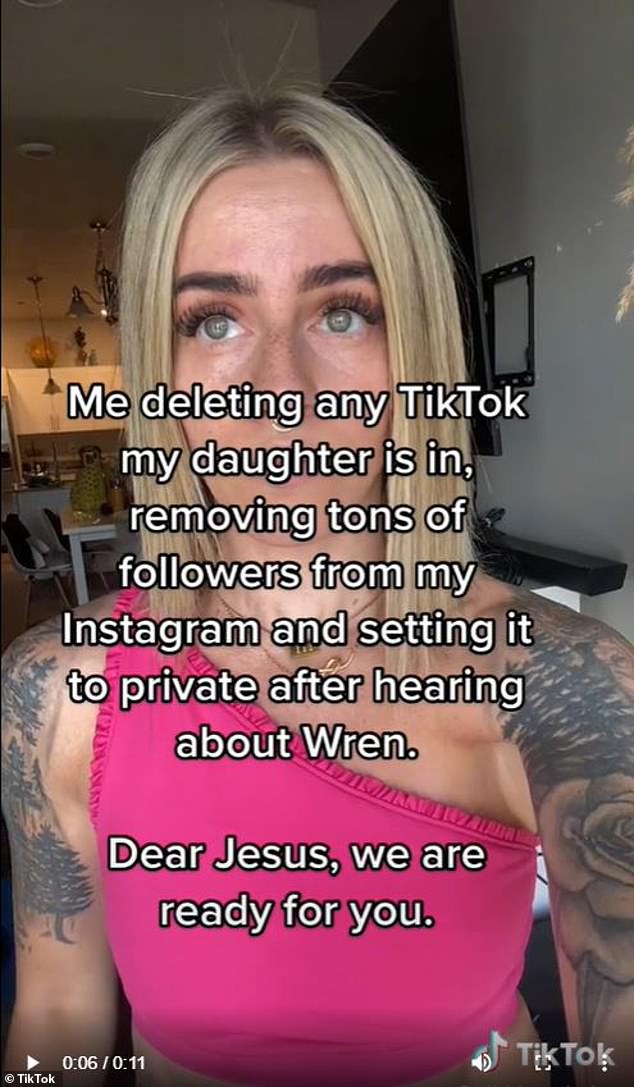 Users have been urging parents to remove any videos of their children doing seemingly innocent things, for fear that they will be targeted by predators and pedophiles 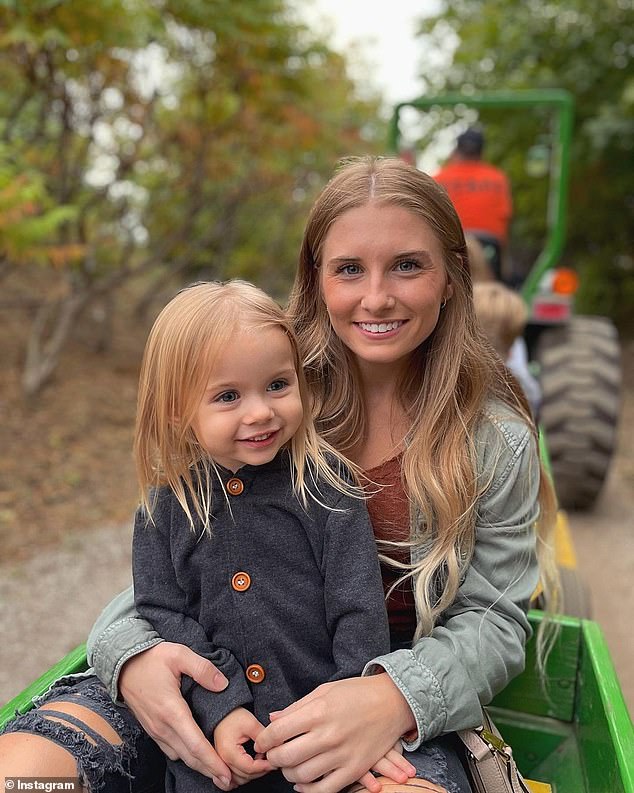 Little Wren Eleanor, 3, is featured in hundreds of videos on TikTok in an account run by her mother Jacquelyn. The mom has been accused of ignoring the warnings from other parents about the safety of her daughter

Meantime, parents of young toddlers are removing pictures of their children off of TikTok after raising concerns about where the footage will end up.

The movement was sparked after the mothers spotted a worrying trend with TikTok’s ‘most popular’ three-year-old girl, Wren Eleanor.

Wren, whose mom Jacquelyn has posted photos and videos of her on the social media site since she was born, has more than 17 million followers on the platform.

Her account features hundreds of seemingly innocent videos of the blonde toddler playing and enjoying days out with her mother and grandma, along with sponsored content.

Jacquelyn began receiving an onslaught of abuse after online sleuths pointed out that videos of the three-year-old playing in the bath and holding tampons were being saved by hundreds of thousands of people.

TikTok allows users to save content that they like to their accounts. Some mothers, however, warn the feature is being used as a catalogue for pedophiles to share images of children.