KOURTNEY Kardashian has dropped yet another major clue she is pregnant with Travis Barker’s baby in a new telling picture.

The star was spotted covering up her baby bump as she wore an oversized jacket.

She wore a massive brown and black patterned oversized jacket to cover up her midrif.

Later, the star posted another video in an oversized outfit.

Kourtney posed in a glitter black skeleton sweatsuit and modeled a sparkly bag. 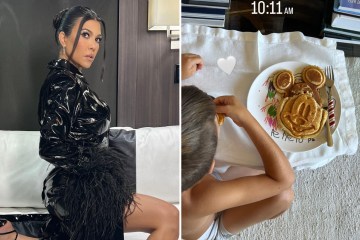 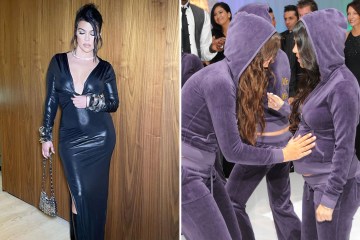 In the boomerang, Kourtney posed crossing her arms over her belly and holding the bag in front of her stomach.

The star craftily covered up any signs she may be showing a bump.

Kourtney got everyone talking the other day when she reposted an old photo of her sister Khloe touching her baby bump.

She gushed: “Omg” before tagging younger sister Khloe, 38, in the slide.

The star shared the snap which had resurfaced on a Kar-Jenner fan account.

The throwback photo had been taken when Khloe and the Keeping Up With the Kardashians clan changed into matching velour tracksuits after the Good American founder’s wedding to Lamar Odom in 2009.

After a whirlwind wedding, Lamar and Khloe officially divorced in 2016.

Although Kourtney sharing an old photo from when she was pregnant made fans wonder if the star is dropping hints.

Earlier this month, Kourtney dropped another hint that she could be expecting in a new video.

In the clip, the mother-of-three wore a printed white T-shirt layered over a mesh open-knit black skirt and pink boots.

She accessorized with black sheer gloves, a silver chain belt, and chunky necklaces.

Kourtney filmed herself walking along in her outfit, before panning the camera down and resting her hand on her stomach.

Fans have also been noticing Kourtney has been posting a lot of old photos of herself.

On the family’s new reality show, viewers have been watching Kourtney’s struggle to have another baby.

Fans recently watched the Poosh founder’s bizarre methods as part of her attempts to become pregnant with a fourth child.

In the latest installment, she tried eating hard-boiled quails eggs.

While sitting down for lunch with Steph Shepherd, 32, she told her friend: “I have to eat quail eggs every day.”

Steph seemed concerned as she asked: “Why?”

She and Travis also openly shared their struggles as Kourtney tried to conceive through IVF.

As for Travis, he also has two children: Landon, 18, and Alabama, 16, with his ex Shanna Moakler.