Luca Bish‘s sister has revealed she’s created a spreadsheet of names of ‘shady people’ her brother ‘should not entertain’ when he leaves the Love Island villa.

Posting on Luca’s Instagram Stories, his sister wrote alongside a photo of a hamster: ‘This is me at my computer every morning adding to my spreadsheet names that have been shady towards Luca so he never entertains them when he’s out.’

She added: ‘I also have one of all the massive amounts of love so that he’s filled with joy when he’s back.’ 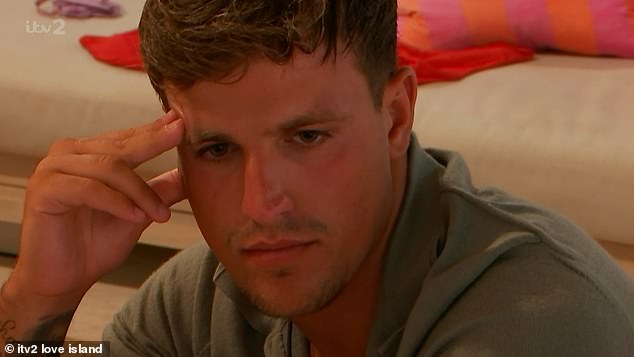 Protective: Luca Bish’s sister took to his Instagram to reveal she’s made a list of ‘shady’ people for him to ‘never entertain’ when he returns from Love Island amid the show’s Ofcom complaints

Her words come after Luca, 24, was the subject of some of the 5000 Ofcom complaints Love Island has faced from viewers for misogyny and bullying – but he is not the only boy in the villa who has been criticised.

During Wednesday’s episode, the fishmonger became embroiled in a tense row with partner Gemma Owen, 19, after he was upset by her raunchy behaviour in a challenge.

Dressage rider Gemma transformed into a sexy flight attendant and threw herself into the task, licking 26-year-old Adam Collard’s chest as the other boys laughed.

But as Gemma moved over to Luca, he was seen ‘pushing’ her on to the next boy, Dami, as he appeared to be visibly annoyed by the raunchy moment. 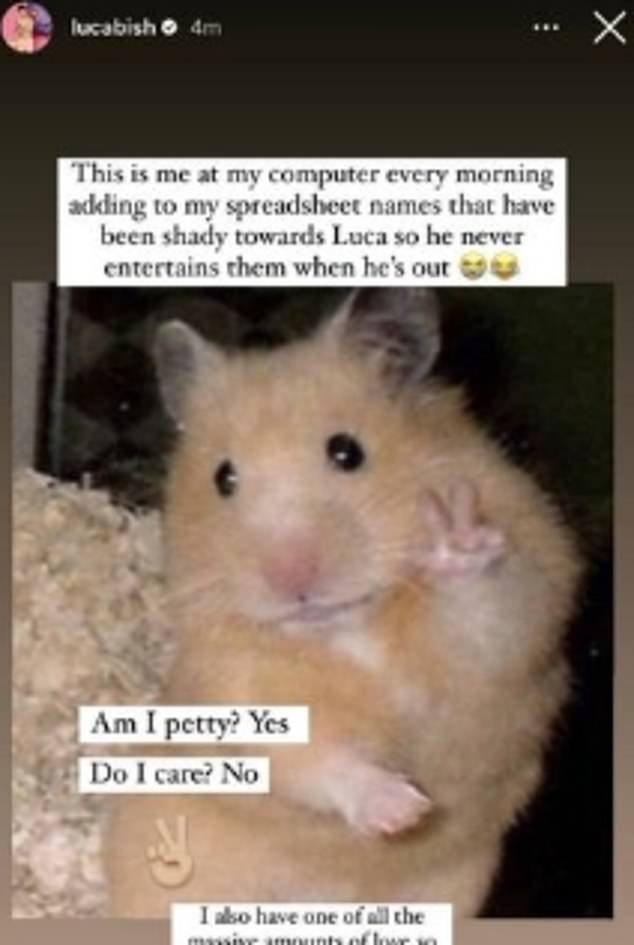 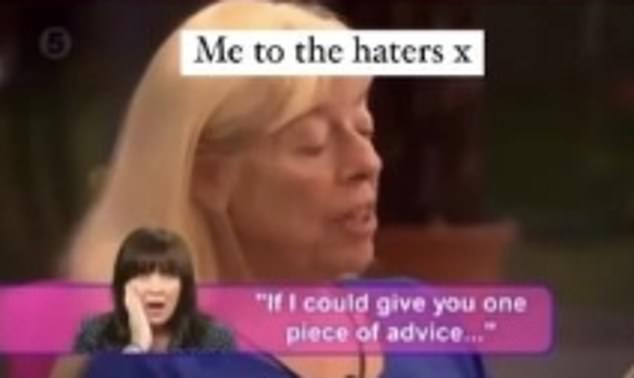 Gemma branded Luca a ‘p***k’ for getting annoyed at the challenge, while Indiyah Polack, 23, said he was being a ‘baby’.

Watching the antics unfurl at home, viewers were quick to point out that Luca had previously told Tasha Ghouri, 23, ‘it’s just a game’ when she became upset after the Truth Or Dare and Snog Marry Pie challenges.

Tasha was the left visually upset after Dami and Luca pushed cream pies into her face during the supposedly light hearted game, with fellow Islanders later agreeing things went ‘too far’.

Luca also clashed with the Thirsk native after she was left in tears when finding out that she, and Andrew Le Page, 27, had landed in the bottom three again following a public vote.

As the dancer sobbed, she was seen shouting ‘f*** off’ towards a baffled Luca, who said she ‘should focus on the positives’ after making Andrew her boyfriend.

Luca had also accused Tasha of ‘riding Andrew’s coattails’ when forced to choose an islander in a challenge as Dami echoed this and said ‘you know what you need to do’.

Both boys later apologised to both Tasha and Andrew over their behaviours, insisting they never wanted to make them upset.

Fans have questioned whether Gemma’s mum Louise Bonsall is on Luca’s sister’s shady list after she shared her concerns over his behaviour on the show towards Tasha.

Louise commented on a video of Tasha asking Andrew to be her boyfriend on Instagram saying: ‘I hope Tasha is ok, I feel it’s close to bullying now which is so sad to see.’

Love Island was hit by 3,617 complaints from viewers, following the Movie Night episode which saw Luca lose his temper at his partner Gemma for supposedly flirting with Billy Brown, 23 while in Casa Amor – despite her denying she had done.

Women’s Aid have already stated that they are in talks with the show over some of the behaviour displayed by the males.

A statement from the charity last week insisted that ‘specific information on abusive relationships and an understanding of controlling behaviour in relationships’ is missing from the channel’s ‘inclusive training’ ahead of the series.

Women’s charity Refuge issued a separate statement highlighting the ‘gaslighting and coercive control’ shown by some of the boys.

Ten days ago, Luca’s family took to Instagram Stories on his account to say they don’t condone his behaviour towards partner Gemma.

They said that while he would be ’embarrassed’ by his actions and will no doubt apologise, he doesn’t deserve the abuse he has been getting.

They say his behaviour is not reflective of the boy they ‘know and love at home’ but noted that his Love Island experience is an intense one.

They wrote: ‘I want to apologise on behalf of Luca for his insensitive reaction on last night’s episode. I know that when he watches it back, he will be embarrassed and deeply apologetic.

‘We as his family don’t condone his behaviour last might, but we do understand he is in an intense environment where his actions are heightened. Last night was not reflective of the boy we all know and love at home.

‘Please be aware death threats and nasty comments totally overstep the mark and something we has a family should not have to ensure, for this reason we have turned off the comments and messages.

‘For all those who have sent messages checking in on us, we would like to thank you very much and we see you.’

Former Love Islander Megan Barton-Hanson has defended Luca over his treatment of Tasha.

The model, 28, has praised the Brighton native for ‘saying how he feels’, adding that she feels ‘it’s so obvious that Tasha is just settling’ with Andrew Le Page.

Megan has insisted that ‘Luca’s got a point’ in a recent interview.

Speaking to RadioTimes.com, the star – who got to the final during series four – admitted: ‘I feel like, good for him for saying how he feels and not sitting on the fence and just being quiet because he wants to be liked by everyone.

‘I actually rate that.’

Megan confessed she didn’t initially ‘like Luca as a person’ because of his relationship dynamic with Gemma.

‘I felt he was very protective and a lot with Gemma,’ she told the outlet. ‘But I feel like he’s just owning it and being himself and if that’s how he feels, [then] good for him actually voicing that and I agree with him.’

She added: ‘I feel like it’s so obvious that Tasha is just settling with [Andrew] because she thinks it’s going to get her to the final, personally. So I agree with the boys.’