‘Love is love’: Manly supporters BACK the club’s pride jersey decision as volunteers hand out rainbow badges to fans after turbulent week that has rocked the NRL club – but some call for seven rebels to be ‘respected’Manly fans have embraced the rainbow colours after a turbulent week at the clubThe club has been rocked after seven players refused to wear the pride jerseySupporters voiced their support for LGBTQIA rights before kick off on Thursday Volunteers dished out rainbow badges as fans entered Brookvale Oval LIVE: Manly play their first match since the club’s pride jersey farce

Manly fans have donned the rainbow colours in a huge endorsement of the club’s pride jersey as supporters expressed their view in the wake of a huge week that has rocked the NRL side.

Seven players will not feature in tonight’s game against the Roosters after refusing to wear the club’s pride jersey – with the traditional white piping replaced by rainbow colouring for this game only.

Josh Aloiai, Jason Saab, Josh Schuster, Haumole Olakau’atu, Tolutau Koula, Christian Tuipulotu and Toafofoa Sipley have cited cultural and religious reasons for their refusal to wear the jersey, in a move that has divided opinion across Australia.

However, Sea Eagles supporters have turned out in force to support the club’s push for equality, with one fan holding a sign which read: ‘I [heart emoji] Manly. Love is love.’

One Manly-supporting father was seen wearing a rainbow-coloured ‘proud’ pin badge while sat with his Roosters fanatic son before the game.

However, not every supporter was singing from the same hymn sheet, with two fans spotted holding small posters with the message: ‘Respect the Manly 7 #Inclusion’. 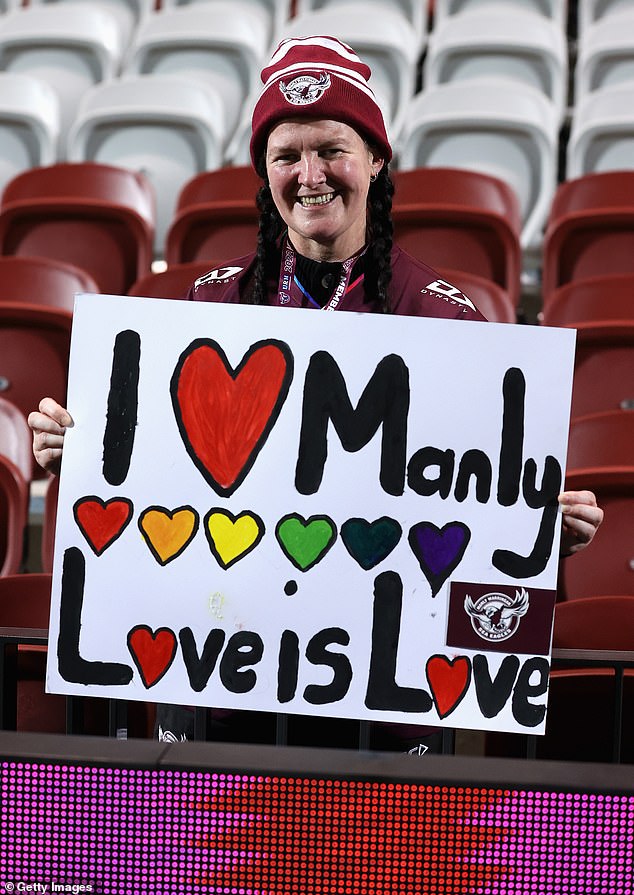 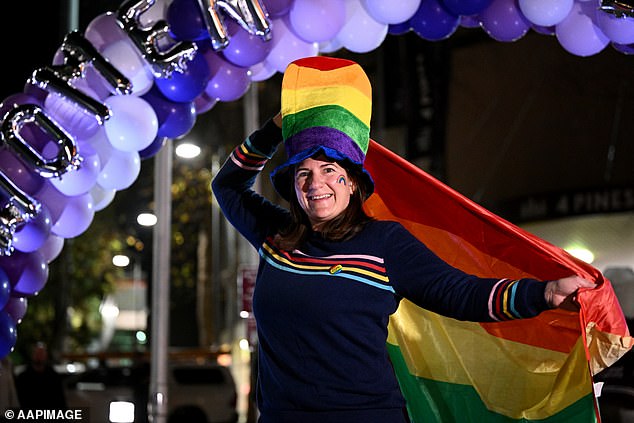 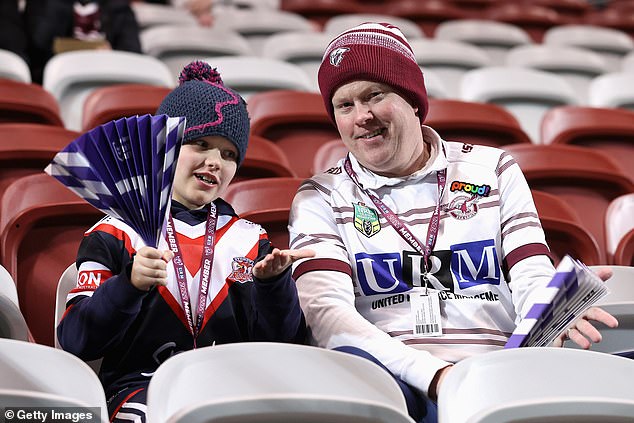 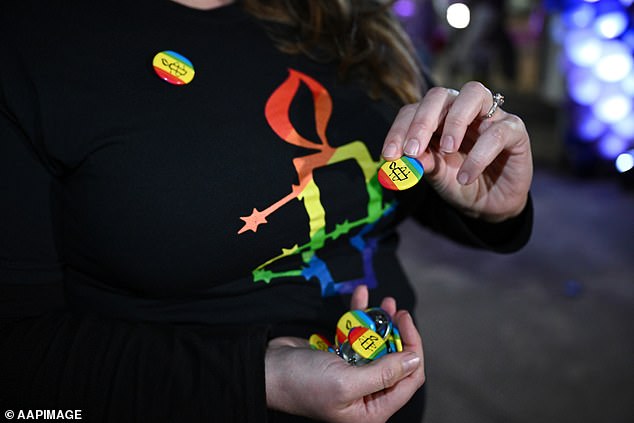 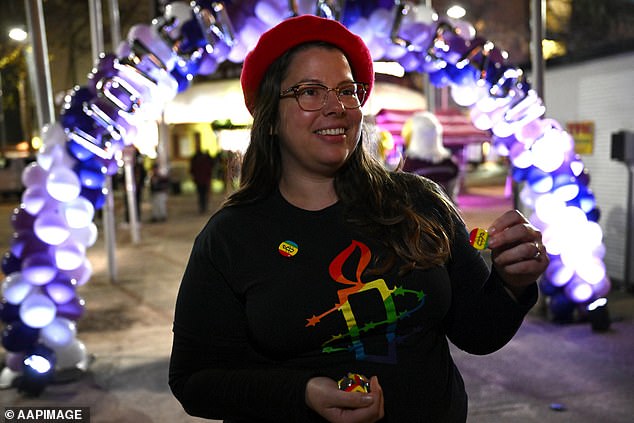 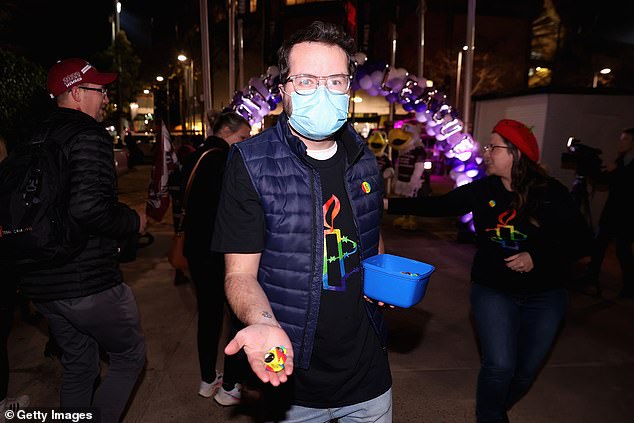 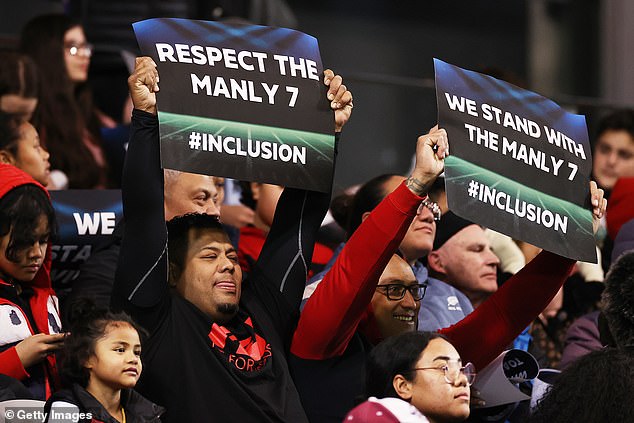 Rugby league has taken a backseat this week as the saga has unfolded, and Roosters coach Trent Robinson appeared in a reflective mood as he stepped out onto the turf before kick off.

The three-time premiership winner issued an emotional plea on Wednesday and insisted that none of his players would refuse to play if the club opted to design a pride jersey.

‘It’s unfortunate in 2022 we’re still having this conversation,’ Robinson said via Sydney Morning Herald. ‘I think it’s great what the owners of Manly have decided to do. It’s unfortunate it’s panned out this way.

‘In the youth gay community [suicide is] five times what normal society is. That’s because they don’t feel included. For us in 2022, to not be inclusive and not say it’s OK to be who you are, is unacceptable. 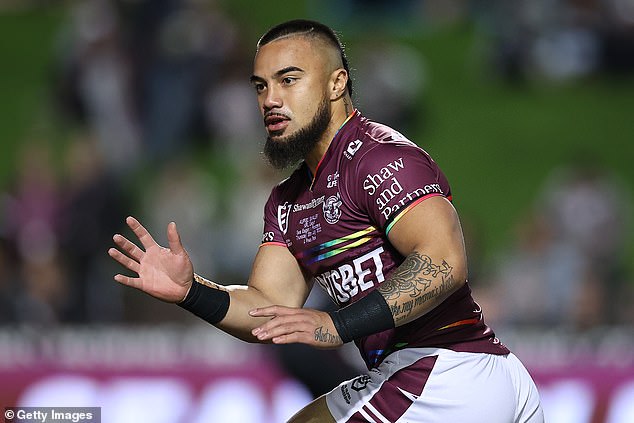 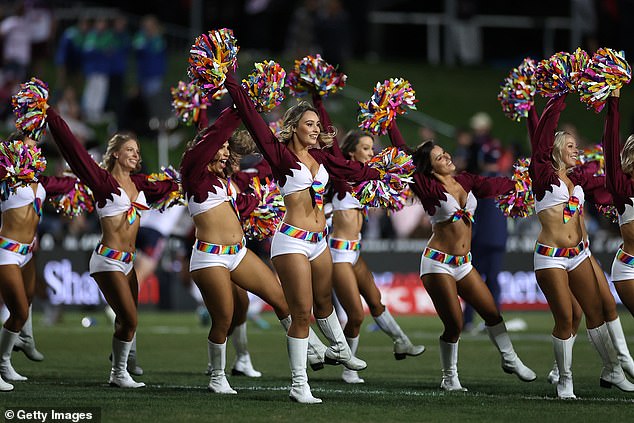 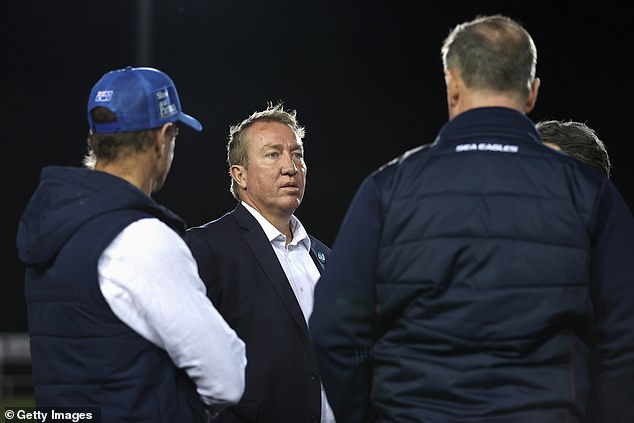 ‘If someone said they weren’t going to wear the Indigenous jersey, there would be an outcry. Forty years ago, that wouldn’t have been the case. Eighty years ago, we wouldn’t have had Women In League Round. We’ve moved on those fronts, and we haven’t moved on this. We need to move towards it at some point.’

In the fallout of the Manly saga, ARL Commission chairman Peter V’landys has said that the NRL would consider a pride round and Robinson said his players would have no problem wearing a jersey that promotes diversity and inclusivity.

‘Definitely,’ Robinson said. ‘That’s my personal view. We’ve talked with our players about it. We’ve got a job to do and play a Roosters style of footy and dominate tomorrow night, but whether we like it or not we have things on jerseys we represent.

‘That’s a decision for the club and the game to make, but my personal opinion is about equality. I want people to feel like they’re cared for, loved and have a place no matter their sexual preference in the world.’