Mexican border agent is forced to rescue Venezuelan migrant from drowning in the Rio Grande as he tried to cross the US borderA Mexican immigration agent prevented a Venezuelan migrant from being swept by a rip current and drowning in the Rio Grande on TuesdayThe Venezuelan man tried to cross from Piedras Negras, Coahuila to Eagle Pass, Texas and cried for help when he saw that he couldn’t reach the U.S. border The immigration agent was seen on video swimming towards the man with a life jacket and later led him back to shoreThe Venezuelan man was provided medical assistance and then was taken to a local immigration agency for processing

By Adry Torres For Dailymail.com

A Mexican border agent was forced to jump into the river to rescue a migrant from being swept downstream.

The agent was patrolling Mexico‘s side of the Eagle Pass International Bridge 1, that connects Piedras Negras, Coahuila with Eagle Pass, Texas, when he heard the man’s cries for help on Tuesday, Mexico’s National Institute of Migration said in a statement.

Footage released by the immigration agency showed the agent swimming across the river with a life jacket.

The agent was able to place the personal flotation device on the Venezuelan man and lead him back to shore. 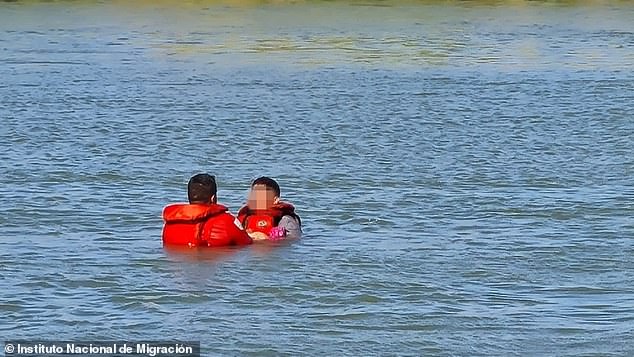 A Mexican immigration agent (left) approaches a Venezuelan migrant (right) who struggled to stay afloat in the middle of the Rio Grande while trying to reach the United States border in Texas on Tuesday. The individual was escorted back to the Mexican town of Piedras Negras and provided medical treatment before he was transferred to a local immigration agency for processing 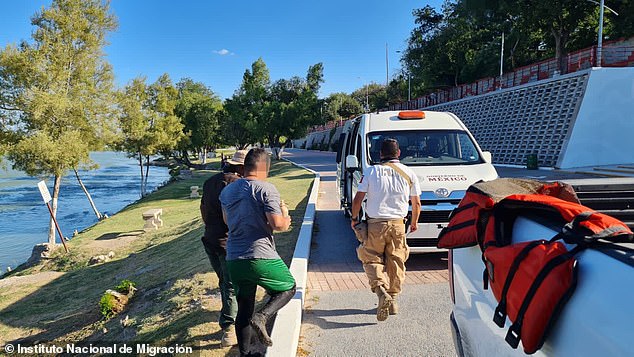 A Venezuelan migrant is escorted to by Mexican immigration agents moments after he was rescued for nearly drowning in the Rio Grande in a failed attempt to cross from Piedras Negras, Coahuila to Eagle Pass, Texas, on Tuesday

The migrant received medical treatment and was taken to a local National Institute of Migration, where he was processed.

His rescued came on the same day immigration agents encountered two migrants from Venezuela, one from Peru and another from Uruguay from possibly having drowned in the Rio Grande in the Coahuila town of Ciudad Acuña.

For the most part, migrants stopped in Mexico’s northern border region with the United States are sent back to the southern state of Chiapas, which borders with Guatemala, and await the approval of a 30-day permit to remain in the country while their immigration process plays out in. 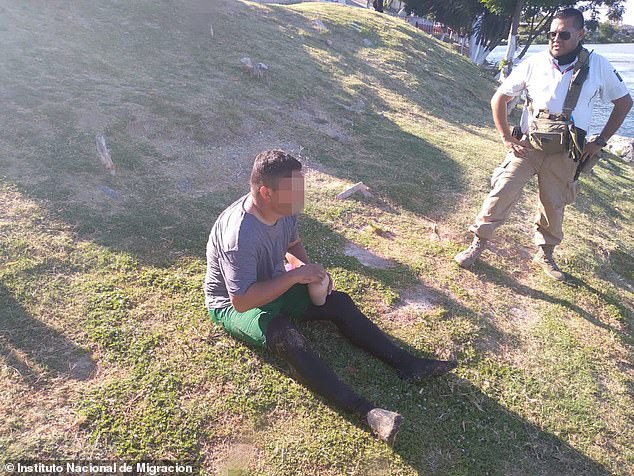 The Venezuelan migrant cried for help when he was not able to advance towards the U.S. border in Texas while trying to swimming across the Rio Grande on Tuesday. An immigration agent from Mexico swam out to him and gave him a life jacket before escorting him to the shore in the border town of Piedras Negras 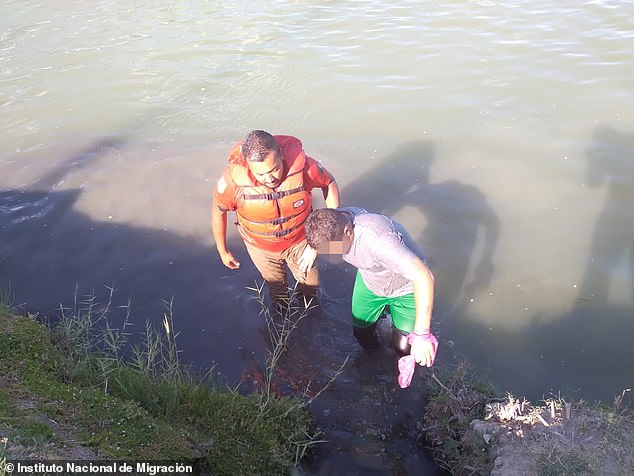 Many object to the Mexican strategy of keeping them in the south, away from the U.S. border.

They say the process of normalizing their status – usually through applying for asylum – takes too long and they can´t provide for themselves while waiting weeks in the Chiapas city of Tapachula because jobs are scarce.

The increased delay in processing permits frequently leads to the forming of caravans composed by children, adults and the elderly marching towards Mexico City to apply pressure on officials before continuing on to the U.S.-Mexico border.

On Monday, as many as 2,000 migrants set out from the Chiapas town of Tapachula after they had grown tired of the slow paperwork at overcrowded Mexican immigration offices.

Some caravans have dispersed after traveling 28 miles to the town of Huixtla, where migrants, most of them from Venezuela and Central American. have received permits.

‘It is tough, but we’ll keep on going in hopes they’ll let us through,’ said Nicaraguan migrant Moisés Chinchilla, who like most hopes to get a temporary residence permit.