Nadine Dorries was today forced to cut short a Commonwealth Games interview after a Sky News cameraman was threatened and she had to call security.

Ahead of tonight’s opening ceremony, the Culture Secretary was being grilled by Kay Burley in the middle of Birmingham when a pedestrian started yelling at the off-screen crew.

An increasingly distracted Ms Dorries initially tried to continue with the interview – until the man’s yelling became so loud she couldn’t hear a question about justifying the £778million cost of the Games.

And when the cameraman appeared to be threatened, she said: ‘We’re going to have to go Kay, I’m sorry. Your cameraman is in a little bit of trouble’.

The camera kept rolling as she listened to the man shouting: ‘Don’t touch me. If you lay a finger on me I’ll have you arrested for assault’.

Ms Dorries then interjected and said: ‘He’s not touching you sir’, to which the irate man replies: ‘He can’t touch me madam, what do you mean he ain’t touching me? He can’t, I’ll have him arrested in five seconds flat.’

The minister, who appears to be unprotected, then turn around and asks: ‘Is there any security? The cameraman did not touch him’. 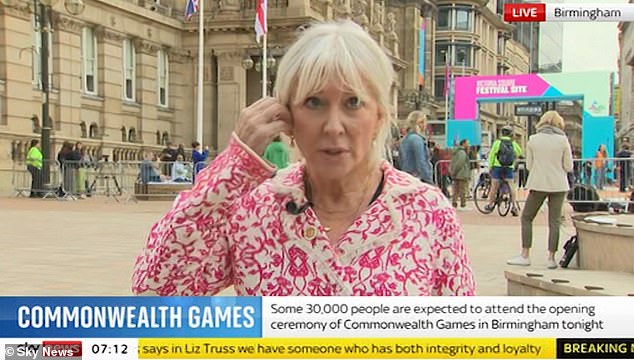 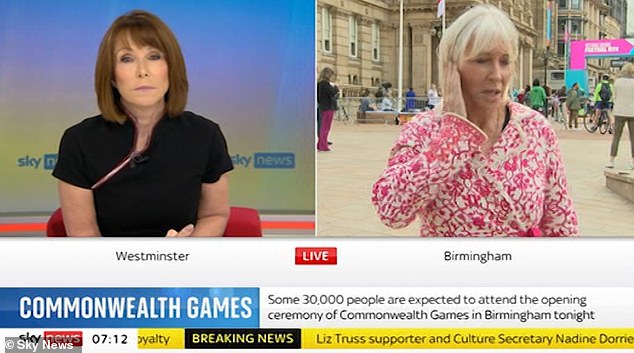 When the cameraman appeared to be threatened, she said: ‘We’re going to have to go Kay, I’m sorry. Your cameraman is in a little bit of trouble’ 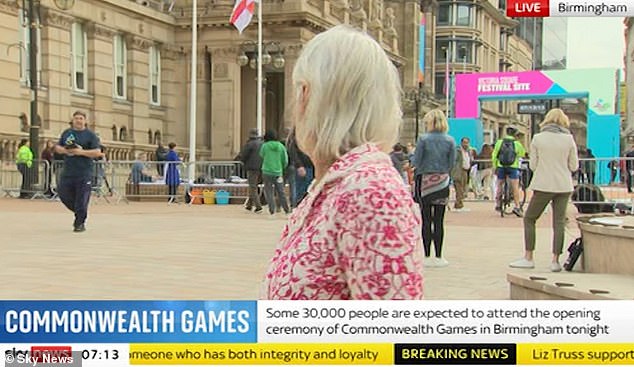 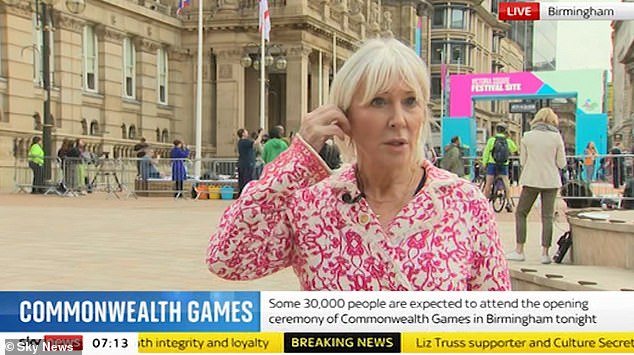 Ms Dorries began speaking to the agitated man off screen and then told viewers: ‘The cameraman did not touch him’ 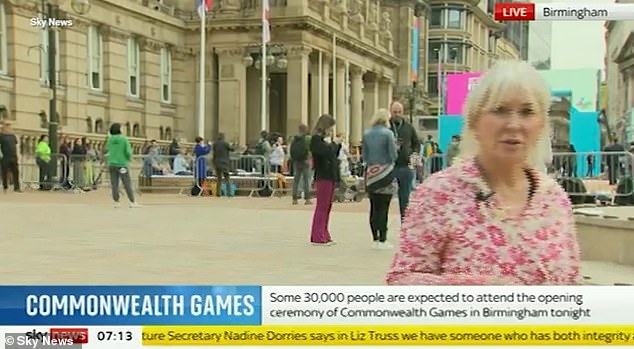 Finally, after around 50 seconds, the feed remains live as she asks if the camera

The man could still be heard shouting: ‘Touch me then? You can’t because they’ll have you arrested for assault.’

Ms Dorries said: ‘He’s not touching you’ and then told viewers: ‘The cameraman did not touch him.’

She then nods to someone off camera and a man appears close to her shoulder as the man appears to be shepherded away, and then says: ‘Shall I go? Shall I move?’ before disappearing off screen.

Ms Dorries appeared to be unharmed but the extraordinary moment does raise questions about how protected she was.

It is not thought that the altercation was sparked by the man recognising the minister and coming to accost her. A source told MailOnline: ‘She was obviously concerned for the safety of the Sky cameraman.’

Minutes earlier she had defended the £778million cost of hosting the Commonwealth Games at a time when families face rising bills and mounting difficulties.

She told Sky News from Birmingham: ‘It’s not a vanity project… This is hugely important.

‘Are you saying we shouldn’t have the Commonwealth Games? I think we are proud and honoured to have picked up the baton when it was dropped elsewhere in the world and to continue to run these Commonwealth Games in the amazing way that we have done.

Ms Dorries, who is backing Liz Truss in the leadership campaign, also said ‘it was no secret’ that Boris Johnson had been a victim of a ‘coup’ when asked if Rishi Sunak was one of the ringleaders.

Ahead of the games, Ms Truss has pledged to counter China’s dominance by forging stronger Commonwealth trade ties if she becomes prime minister.

The Foreign Secretary said she wanted to offer nations a ‘clear alternative to growing malign influence from Beijing’.

By prioritising trade with countries across the Commonwealth, she said economic and security ties would be strengthened – and British businesses would receive a major boost. Miss Truss said she would launch a ‘New Commonwealth Deal’ to ensure the 56 Commonwealth countries act as a bulwark against China.

Announcing her proposals as the Commonwealth Games gets under way, Miss Truss said: ‘I will ensure the Commonwealth sits at the heart of my plans for Global Britain. As one of the largest groups of freedom-loving democracies, we must ensure there are clear benefits to remaining a member of the Commonwealth and offer nations a clear alternative to growing malign influence from Beijing. Prioritising trade with countries across the Commonwealth will strengthen economic and security ties whilst also turbo-charging opportunities for British businesses to access one of the world’s largest economic blocs.’

Miss Truss accused her rival Rishi Sunak of pushing for a closer relationship with China during a heated TV debate on Monday. Mr Sunak said there was a need to acknowledge that Beijing is a ‘threat to our national security, it is a threat to our economic security’.

But Miss Truss challenged him, saying: ‘As recently as a month ago you were pushing for closer trade relationships with China.’

Last night it emerged that Mr Sunak and the Treasury came close to signing a new economic deal with China to ‘deepen trade links’. A leaked Treasury document – seen by The Times – shows the ex-Chancellor was in the advanced stages of striking an agreement on banking, regulation and travel.