NRLW star who delighted fans by kissing her girlfriend on the field after State of Origin game blasts Manly pride jersey boycotters: ‘I felt enraged’Karina Brown and then-girlfriend’s 2018 kiss made headlines around the world Brown has lashed out at seven Sea Eagles stars for refusing to wear pride strip Former Queensland Origin star was ‘astounded’ by their boycott

The NRLW star who made headlines around the world when she was photographed kissing her then-girlfriend after they played on opposite teams in a State of Origin match has voiced her fury over Manly’s pride jersey fiasco.

Karina Brown – whose display of affection with Vanessa Foliaki in 2018 was one of the most amazing images of the season – said she’s been ‘triggered’ by seven Sea Eagles stars refusing to wear the club’s rainbow strip due to their religious and cultural beliefs.

‘I felt enraged and frustrated,’ she told the On Her Game podcast.

‘When I dug a bit deeper I realised it’s not even a pride jersey, which makes it even worse. This is a jersey for everyone in league … whether you love someone of the same sex or whether you love Jesus Christ, it says there’s a place for you in rugby league. 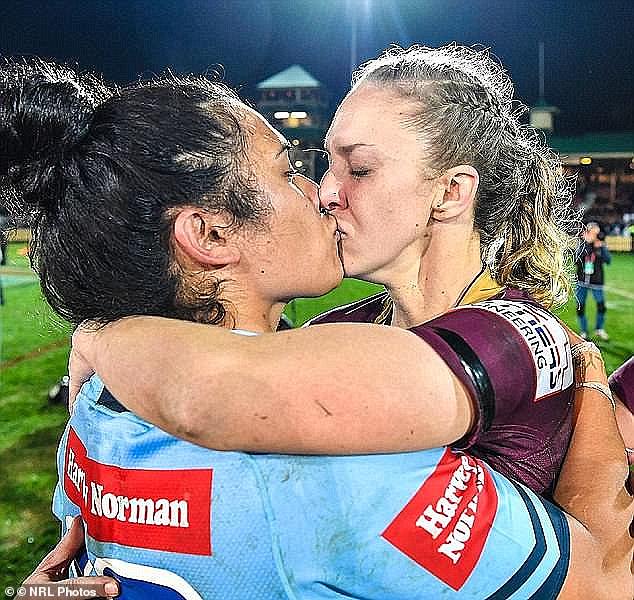 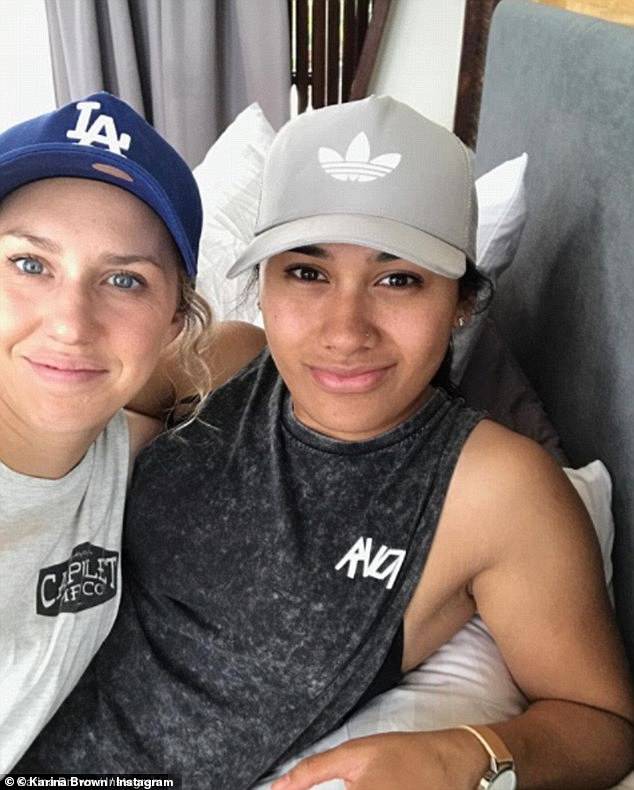 Brown (right, with Foliaki) said the furore over Manly’s rainbow strip was made ‘even worse’ for her when she found it wasn’t made in sole support of same-sex relationships, but for ‘everyone in league’

‘To get upset about a jersey with a few extra colours on the piping … I was astounded that was a stance some players have taken.’

The photo of Brown and Foliaki outraged some footy fans, who hit the then-couple with vile abuse online.

One troll told them to ‘keep that crap to the dressing shed or at home’, while others wrote it was ‘sad to see more of this crap being rammed down our throats’.

The NRL stuck up for the pair, replying to one post that accused the code of ‘sexualising the game’ with the comeback: ‘If we can post a photo of (former Storm and Roosters star) Cooper Cronk and his wife kissing, then we can share a photo of Karina Brown and Ness Foliaki sharing a moment too.’ 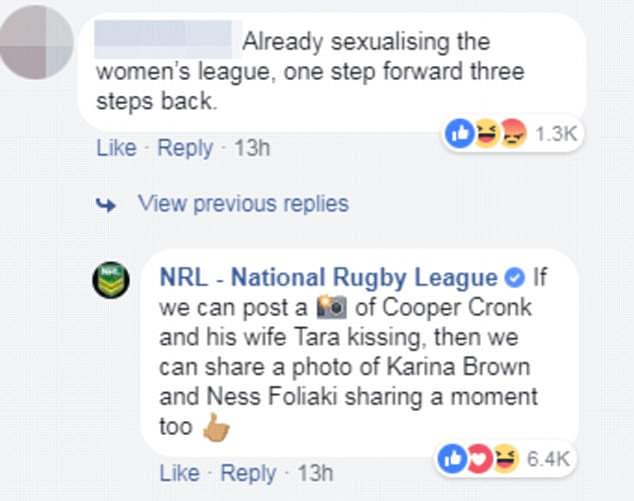 Six of the seven boycotting Manly stars have Polynesian backgrounds, like Foliaki, who said her parents were still coming to terms with her sexuality when the picture made the news.

‘They’re from very traditional Tongan backgrounds, where that’s not OK. Being gay is not a thing in our culture,’ she said.

‘My family copped some backlash from the Tongan community… Mum and Dad just said that they needed time to take it all in. It was hard for them, when no one was expecting the photo and then suddenly it was just out there for everyone to see.

The Manly Seven have been banned from attending the game against the Roosters at the Sea Eagles’ home ground after NSW Police raised concerns for their safety and admitted they are worried about the potential for trouble in the crowd.

Brown was joined in her condemnation of the boycotters by TV star Magda Szubanski, who said they are failing to display the tolerance that’s preached in Christianity.