PAUL POGBA fears he could miss the World Cup if he’s forced to undergo knee surgery.

The Juventus midfielder was recently diagnosed with a lesion of the lateral meniscus in his right knee after suffering a sprain in pre-season training in America last week.

Instead of undergoing surgery in the US, Pogba flew back to Italy earlier this week to further assess the injury.

And according to La Gazetta dello Sport, the former Manchester United man is currently deciding the best course of action between the two surgery options available to him.

Pogba could opt to remove part of the meniscus and be on the sidelines for about “40-60 days.”

But the potential drawback with that operation is that the mobility of his knee could be compromised as the procedure, in general, works better on younger players. 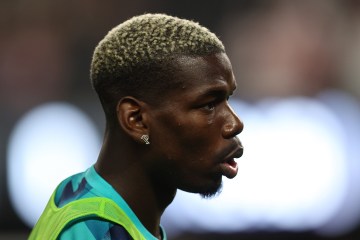 The second surgery available to the France international is suturing of the lesion.

But he could be sidelined for up to FIVE MONTHS should he go down that route – meaning he’d miss Qatar 2022.

It’s claimed Pogba will discuss his options with the French national team’s medical team before making a decision.

Pogba, 29, rejoined Juventus earlier this month following the expiration of his contract with Manchester United.

A club statement read: “When we say goodbye, after a wonderful adventure lived together, in a corner of the heart there is always a little hope of seeing each other again, sooner or later.

“With Paul, it was just like that. In 2016 our paths separated after 4 incredible years.

“Years in which that talented young French boy of less than 20 years made his debut in the First Team, and after less than a month he scored his first goal.

“Years in which we had learned to hold our breath every time we saw him load the shot from outside: we knew how it could end, and often ended in a roar of joy.

“Years in which Pogba became a crazy champion, winning a lot in the black and white jersey, touching the Champions League in 2015, providing 12 assists only in his last season in Turin, leaving with a loot of 34 markings, to which to add the beauty of 32 assists, for a total of 66 goals..”

The statement continued: “Then we said goodbye, and in the meantime he consecrated his talent and his power, also becoming World Champion with France in 2018.

“We said goodbye, but we never really forgot: there is something ancestral in the call of home, that something that in the end, after a thousand adventures, makes you come back.

“Paul is back in Turin, he left as a boy, he returns to be a man and a champion, but there is one thing that has not changed: the desire to write other new unforgettable pages, together.

“We couldn’t be happier: Pogba is back with us.”