President Zelensky has admitted that he ‘worries a lot’ about what will happen to Britain’s support for Ukraine once Boris Johnson leaves office.

The UK have been ‘leaders’ in backing Kyiv, Zelensky told Piers Morgan during a sit-down with wife Olena in Kyiv, but the country needs ‘at least the same level of support’ from whoever comes next to hold back the Russian army.

While he is confident the UK will not shy away from the war whoever takes the helm next, Zelensky said his ‘personal relationship with Boris’ helped accelerate the level of support – and he will not immediately have such a rapport with his successor.

Meanwhile First Lady Zelenska recounted the early hours and days of the invasion, saying her ‘cheeks hurt from smiling’ as she put on a brave face for their children – Oleksandra, who turned 18 two weeks ago, and nine-year-old Kyrylo. 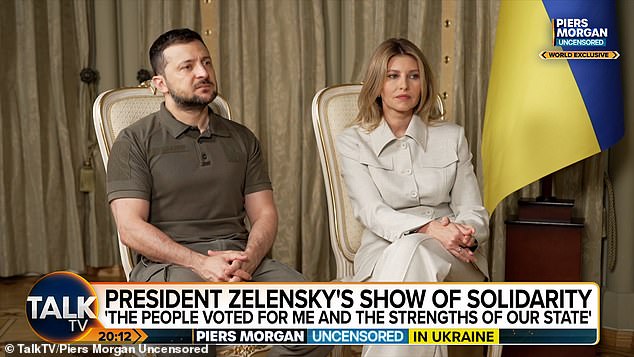 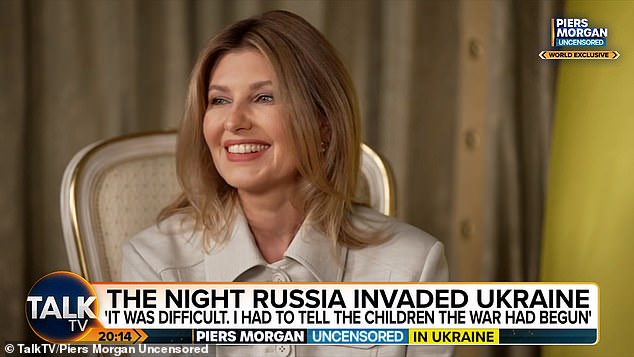 Speaking from Ukraine’s heavily-fortified Presidential Palace for Piers Morgan Uncensored, Olena said she was ‘a little bit worried’ about how she would tell her children a war had started as she went to wake them up of that first day,

‘But luckily, I didn’t have to do that because when I entered the room of my daughter, she was already awake and she understood everything,’ Olena said.

‘I didn’t see in her eyes any panic. She just asked me: “What do we have to do now?”

‘And that was exactly the same question which I addressed to my husband and what he told me was: “Wait, wait, and I will tell you”.’

A short time later, armed guards arrived at the president’s residence and whisked Olena and her children away from the capital to safety.

Zelensky stayed, knowing it would give his country and his soldiers courage to see their leader defying Putin’s onslaught in the capital.

It would be months before the couple saw each-other in the flesh again. Zelensky has still not been able to see his children, for fear Russia will try to kill them.

‘I had some thoughts,’ Olena admitted. ‘Would it be possible for me to see him again? How long is it going to last? What happens next? The fear was there.

‘But I tried not to show it to my children that I was confused, that I was scared…

‘It was important for me to be in a cheerful mood, to keep talking to them, to smile to them. This is what I had to do and after this very long day, believe me, my cheeks hurt because I had to smile so much and to be cheerful.’

Olena revealed that she now gets to see her husband ‘several times per week in the office’ as Volodymyr joked that the interview was a kind of ‘date’ – one of the rare good occasions when they get to see each-other. 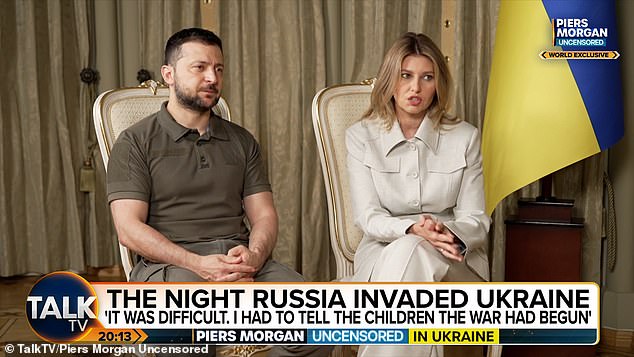 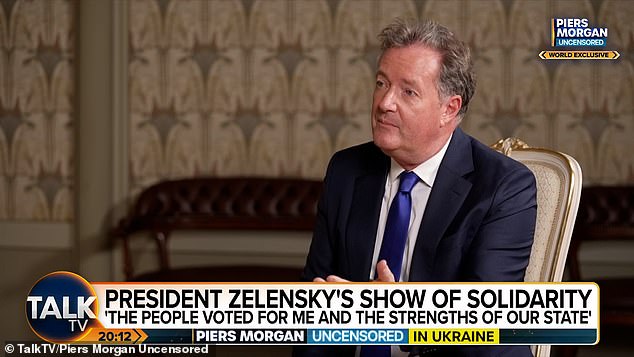 Piers Morgan told the pair that Ukrainians he has spoke to don’t want a peace deal with Russia, and Zelensky agreed – saying it will not bring back murdered children

‘I miss my children, I miss my wife. It is impossible to get used to it. Everything else you can get used to,’ he said.

She added ‘Of course, [the children] miss him… our daughter who graduated from school, she’s entering University, and today she’s going to take an exam.

‘She really needs her dad to be around, to be able to talk to him in this period of time – she’s entering adult life.

‘It’s so important to make sure that there is a smooth transition for her but unfortunately, this is something we cannot afford.’

Though times are difficult, Olena says it is the strength of Ukrainian people that keeps her going.

‘What is supportive, what helps us, you understand that you are not alone,’ she said.

‘All of the Ukrainian people are in this situation. Too many are separated and all of us are waiting for our victory, and waiting for normal life – to be reunited again and just to lead normal lives like ordinary people live.’

But the end is unlikely to come soon. Zelensky categorically ruled out doing any kind of deal with Russia to cede territory in return for a ceasefire.

‘We have no right to do this… this land belongs to Ukrainian people,’ he said.

When Piers pointed out that the Ukrainians he had spoken to all agreed there could be no deal, Zelensky added: ‘They hate, they hate and it’s understandable.

‘When so many families lost, for example, their neighbours, their children, what is the deal? Could Russia, or can Russia give a child back?

‘No. So right now emotion, only one emotion. Hate.’

Asked about his counterpart, Vladimir Putin, Zelensky admits that the ‘scariest’ thought of all is that he is sane and knows exactly what he is doing. 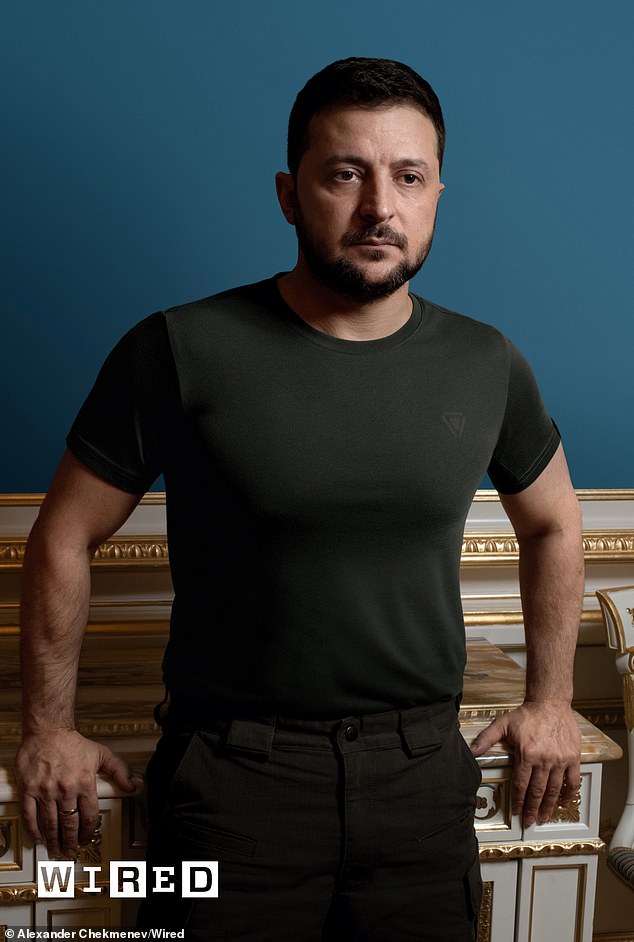 ‘He is enemy number one in this war,’ Zelensky says.

Victory, Zelensky continued, is assured. Russia will never be able to subjugate Ukraine or the Ukrainian people without utterly destroying them.

The only thing that remains to be decided is the nature of the victory.

‘We will win, we already showed the whole world that he can kill us but to conquer our people is impossible,’ he said.

‘Millions of soldiers may die but he cannot occupy the people. He can occupy these towns and villages, but all of them would be destroyed.

‘Because without ruining them they will not be able to take those places.’

Russia is now five months into what was supposed to be a days-long ‘special military operation’ to kill or capture Zelensky and his family and install a puppet regime.

What was supposed to be a lighting-fast assault on Kyiv to seize the capital and decapitate the government stalled, and was then sent packing.

An offensive in the east, to capture the Donbas, met with limited success as the city of Mariupol and then the province of Luhansk were conquered – but has now stalled.

Meanwhile, Ukraine is shaping the ground for a major counter-attack in the south to re-take the city of Kherson.

The main bridge leading from the city – the only regional capital to be captured by Russia of the invasion – to the rest of its occupied territory has now been cut after being struck by precision HIMARS rockets.

Two more bridges – a nearby rail bridge and a second road bridge over the Nova Khakokva dam – have also been damaged, and may not be fully operable.

That means Russia has no easy way of reinforcing troops defending Kherson on the west bank of the Dnipro River, and no easy way to retreat if attacked.

A Ukrainian assault, which would be its first major offensive operation of the war, is expected to take place soon.

If they win, it will provide a much-needed boost for the war effort and prove – at least in theory – that the aim of recapturing territory from Russia is possible.

That will likely increase support from allies both in terms of funds and weapons, with the aim of taking back more occupied territory.

Lose, and Ukraine risks the backing of its allies fading away as Putin piles the pressure on by choking Europe’s gas supplies ahead of winter.

It would also be a major propaganda win for Putin,  and could weaken Ukraine’s military to the point where more counter-attacks become impossible.