A record high of 1.2 million graduates of English universities are not earning enough to start paying back their student loans, currently at the threshold of £27,295 a year.

This is a 20 per cent rise since April last year when one million graduates in the UK tax system were not earning enough to start repayment on their loans.

Nearly six in ten recent graduates in work are also not well-paid enough to start repaying their loans – another new record high.

As of April this year there are 178,300 recent graduates of English universities earning below the £27,295 threshold compared to nearly 127,600 earning more.

The National Union of Students (NUS) told MailOnline that this shows ‘how difficult it is to be a graduate in 2022’ due to ‘wage stagnation and poor quality employment coming out of the pandemic’. 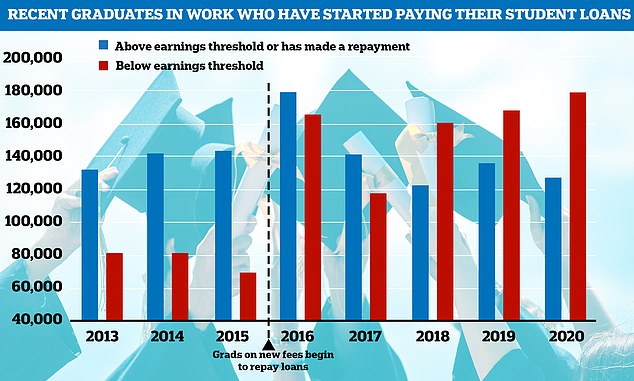 The number of in-work recent English university graduates in the UK tax system who earned more and less than the threshold at the time to repay their student loans. The figures are arranged by ‘repayment cohort’ years, when former students first become eligible to begin repaying their student loans – the first April after the end of their course for most students. Numbers for each cohort are for after at least one tax year has been processed, e.g. the 2020 cohort numbers are for repayments in 2021/22 and the 2019 cohort in 2020/21. Source: Student Loan Company 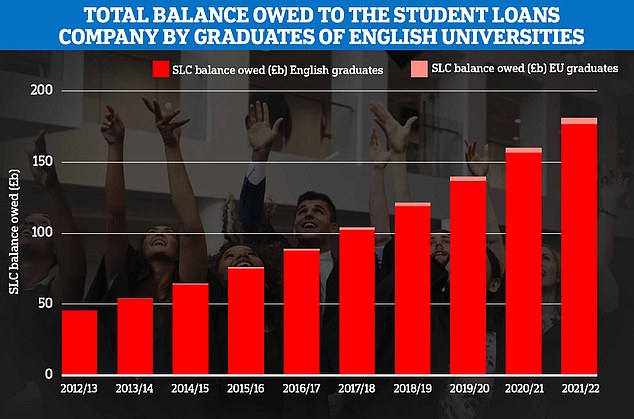 The Student Loan Company’s balance sheet has risen to a massive £181.6billion in April this year up from £45.4billion in the financial year 2012/13. Source: Student Loans Company

Of all English and EU graduates from English universities with a student loan who are in-work and resident in the UK (excluding those who have fully repaid), one-third, nearly 1.14milllion, are currently earning below the threshold and two-thirds, around 2.2million, are earning above it. 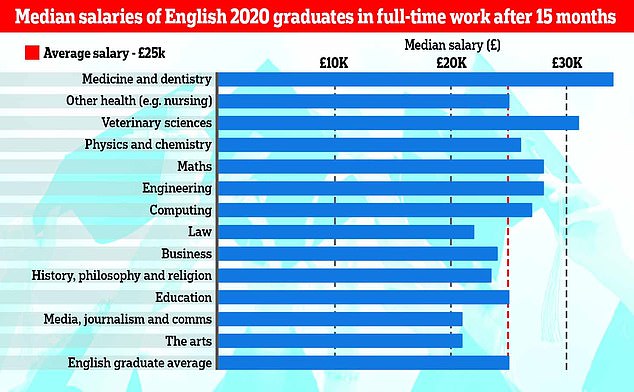 How much English graduates of different subjects can expect to be earning 15 months after finishing their university degree. Source: Higher Education Statistics Authority graduate outcomes survey

Save the Student founder: ‘Worrying’ to see graduates not earn enough to repay their student loans 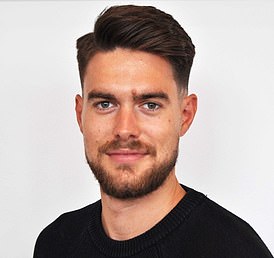 Student finance expert Jake Butler told MailOnline that it was ‘worrying’ to see more graduates not earning enough to repay their loans.

The savethestudent.org founder added: ‘The fact that this has come at the same time as lower unemployment suggests that more students are having to take on lower paid jobs or zero hour contracts when leaving university.

‘The 2020 cohort in particular will have entered the job market as England was struggling with COVID and an uncertain economy.

‘However, it’s worth noting that the threshold increased by close to £2,000 in two years while the average increase in wages slowed down.’

He added that focusing on recent graduates’ pay can give a ‘false indication’ of how much they will pay over their lifetime as ‘most graduates will eventually see their wages increase at a rate faster than the threshold’, especially considering that it has been frozen.

He said most graduates will ‘see themselves making repayments for the majority of the 30 years after graduating’.

Most graduates living in the UK are first eligible to repay their loan via HMRC from the April after their course ends.

This has risen to 58% for the 2020 cohort, mostly graduating in 2019, not earning enough to repay their loans in the 2021/22 tax year – for when the most recent complete data was recently released by the Student Loans Company.

This is despite unemployment in university leavers approximately halving in the past five years.

After a year UK tax system, 10,100 graduates in the 2015 repayment cohort were not in employment within 90 days of graduating, and nearly 12,300 were unemployed after more than 90 days.

An NUS spokesperson told MailOnline: ‘The truth is, this is about wage stagnation and poor quality employment coming out of the pandemic, and it’s all contributing to the growing cost of living crisis for students and young people.’

The 1.2million not repaying their student loans is 19 per cent of all graduates on the SLC books in the UK and overseas (including the 24.8 per cent who have paid their loans off), a rise from 17.6 per cent since last year.

The threshold to begin repaying student loans has risen in most years since £9,000 tuition fees were introduced by David Cameron’s coalition government in 2012.

For ‘Plan 2’ loans, for students who started university under the higher fees, the repayment threshold was £21,000 in 2016/17, when graduates under the new fees regime were first able to repay their loans, and 2017/18.

The threshold has been frozen at £27,295 for this financial year, so more graduates are likely to make repayments to their loans as the cost of living crisis hits their pay packets. 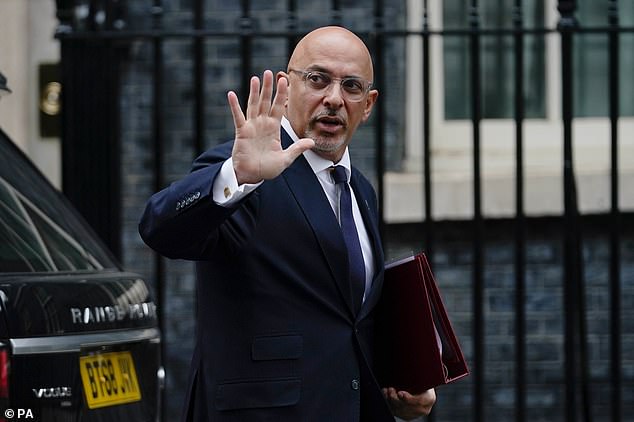 Then-Education Secretary Nadhim Zahawi announced in February that students starting undergraduate degrees from September next year will pay back their loans once they earn £25,000. Pictured: Nadhim Zahawi arriving in Downing Street in February last year

Then-Education Secretary (now Chancellor) Nadhim Zahawi announced in February that students starting undergraduate degrees from September next year will pay back their loans once they earn £25,000 until 2026/27 and the loan will not be written off for 40 years, compared to 30 years for those on ‘Plan 2’ loans.

The Department for education estimates the average borrower will pay £25,300 in 2021/22 prices over the course of their loan under the new system compared to £19,500 under the old one.

The NUS said: ‘At minimum, the government needs to start to raise the loan repayment threshold in line with the cost of living, and put students and graduates first in their education policy, rather than focusing purely on clawing back as much money as possible.’

However, director of the Higher Education Policy Institute Nick Hillman said that the figures show it was a mistake to raise the repayment threshold to £25,000 in 2018 as it puts ‘too big a burden’ on taxpayers, adding that the government’s new policy will rebalance the student loans system.

Mr Hillman said: ‘The English student loan system is very progressive, with taxpayers picking up more than half the tab – including the entire debt of those who never find secure paid employment.

‘But it was an error to raise the repayment threshold so much in 2018 and to go on raising it since then. This has put too big a burden on the shoulders of taxpayers, most of whom have not had the benefits of a university education.

‘The Government is committed to reducing the repayment threshold and extending the repayment term for new students, rebalancing the system. This will reduce the number of people who get a degree but don’t contribute towards the costs.

‘These new numbers from MailOnline indicate why this change is necessary and will help people to monitor the Government’s latest policies to see if they have the effect that is claimed.’ 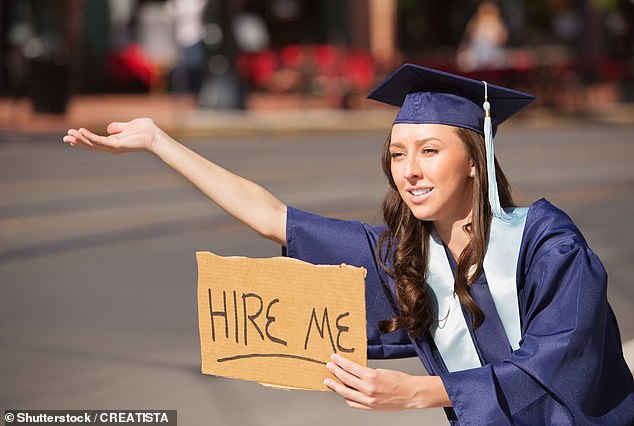 ‘The truth is, this is about wage stagnation and poor quality employment coming out of the pandemic, and it’s all contributing to the growing cost of living crisis for students and young people,’ an NUS spokesperson told MailOnline

The Department for Education said their reforms will mean more than half of graduates who starting university from September next year will repay their loans, up from 20 per cent of those who started 2021.

The government claims the rebalance of the burden of student loans would ‘make the system fairer for taxpayers’ and be ‘sustainable in the long term’.

The median salary after 15 months for those who graduated in 2020 was £25,000, according to the Higher Education Statistics Authority graduate outcomes survey.

This rise is approximately in line with inflation up to 2021, however the rates have sharply risen this year to highs of