EXCLUSIVE: St Kilda star Darragh Joyce and club make grovelling apology after he gave an X-RATED answer to an innocent question in magazine known as the AFL’s bibleDarragh Joyce appeared in last weekend’s edition of the AFL Record He gave a VERY X-rated answer to which musical instrument he’d like to playThe magazine claimed the profile was provided directly from the SaintsSt Kilda admitted the club and player were ‘remorseful’ for the comment

Saints defender Darragh Joyce and the club have been forced to make a grovelling apology after the Irishman’s X-rated answer to an innocent question slipped past the AFL Record proofreaders and made it into print.

When Joyce was asked which musical instrument he’d like to play in last weekend’s edition of the publication known as the ‘AFL bible’,  he answered ‘skin flute’ – which is Aussie slang for penis.

The cheeky Irishman’s obscene remark was a rare miss by a magazine that is loved by footy fans all over the nation. 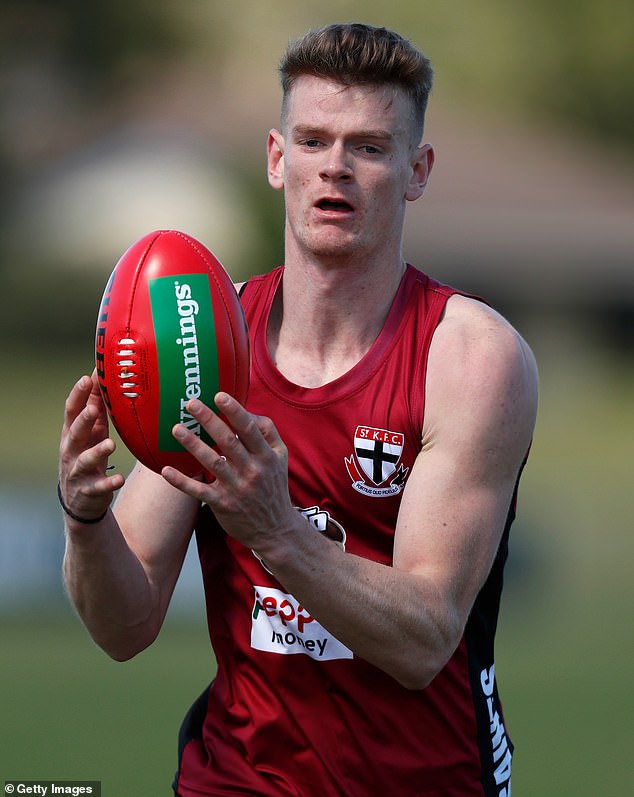 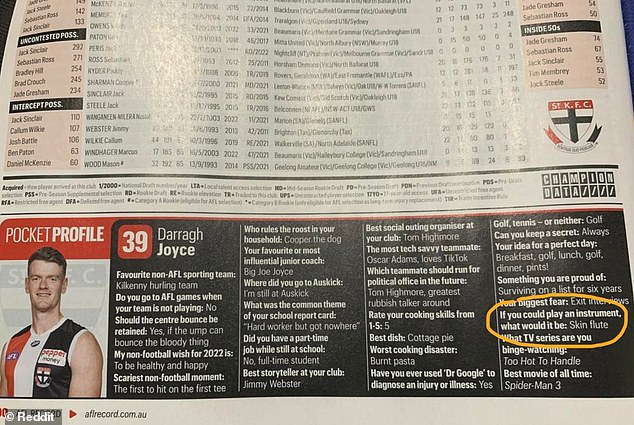 When contacted by Daily Mail Australia, an AFL Record spokesman confirmed: ‘Darragh Joyce’s Pocket Profile was provided directly from the club at the start of season.’

The Saints confirmed they had spoken to Joyce over the comment in a statement provided exclusively to the Daily Mail Australia.

‘St Kilda Football Club has spoken to Darragh Joyce about his response to a question in this year’s Footy Record player profile,’ a St Kilda spokesperson said.

‘The response provided was inappropriate and unprofessional.

Darragh is remorseful for his comments, and he and the Club apologise to anyone offended by the remark,’ said the spokesperson. 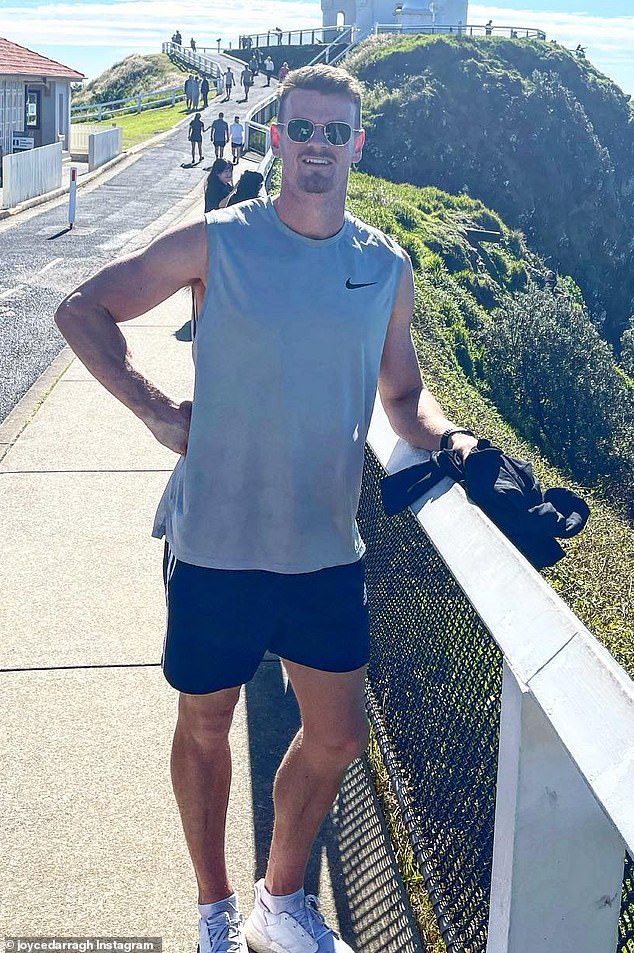 That being said, the AFL Record is the one responsible for putting the magazine in print and online, and the X-rated answer to an innocent question is an embarrassing proofreading error for the beloved publication.

One definition of the x-rated answer on Urban Dictionary says a skin flute ‘is a lesser-known euphemism for a “penis.” Use of the term “skin flute” is of an obviously hip, knowledgeable individual.’

Joyce, who was previously a Hurling star for Kilkenny in Ireland, joined St Kilda as an international rookie in 2017 and has since played 13 games for the club, primarily as a key defender. 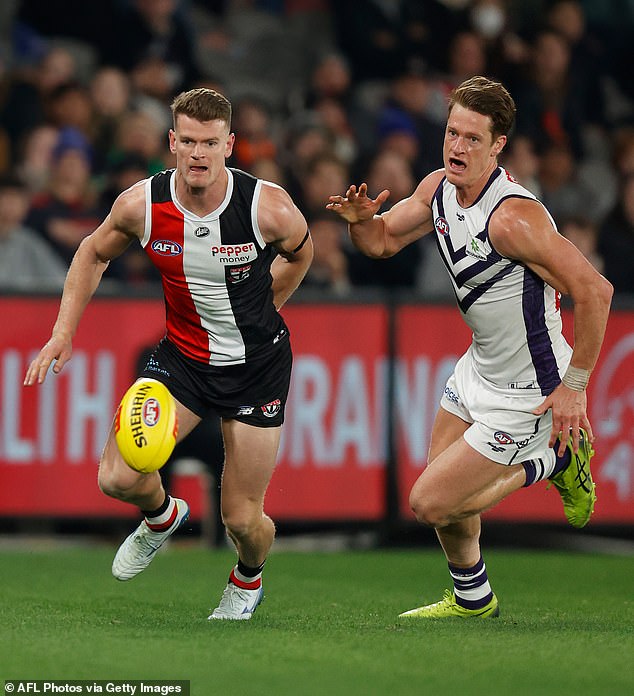 He showcased his witty personality throughout the rest of the pocket profile, describing his ideal day as simply ‘breakfast, golf, lunch, golf, dinner and pints’.

The defender didn’t shoot for the stars when he said what he most proud of, suggesting it was simply ‘surviving on a list for six years’, though it really is an amazing accomplishment for someone who had never previously played the game.

Joyce suggested his biggest fear was ‘exit interviews’ and gave a ruthless analysis of his schooling: ‘Hard worker but got nowhere’.

Joyce is far from the only footballer to use an AFL Record pocket profile to show their humorous side. 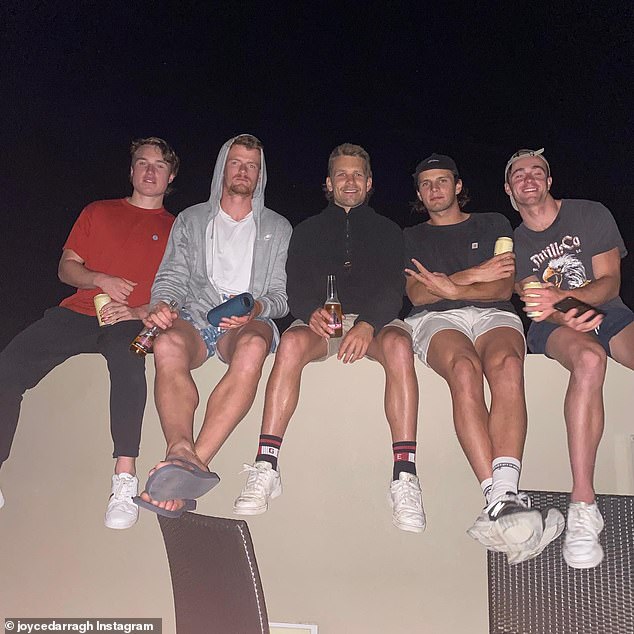 Kangaroos prankster Kayne Turner in his 2017 interview revealed his least-preferred household chore was ‘turning off a light’, and suggested his wife/partner/best friend would describe him as ‘sub-par’.

A year prior, Suns veteran Alex Sexton gave fans a chuckle when he said the best piece advice his mum ever gave him was ‘to stop doing wrestling moves on his sister’.

Cult Magpies midfielder Dane Swan was always a favourite for Record readers, suggesting his dream job was putting the stickers on apples and saying if he could appear on any reality show it would be ‘Crime Stoppers’.

You’d have to think Joyce now easily eclipses that trio for the cheekiest comment of the lot – and the answers will be MUCH more G-rated from hereon out.