Just imagine, if you can, a 105-mile long, pencil-thin horizontal skyscraper — a sidescraper — that cuts through high mountains and arid desert.

It will house a city of nine million people. There will be no cars or streets but flying taxis: oh and a giant fake moon, animatronic dinosaurs and an army of robots to harvest food, cook and clean for the pampered population.

And carbon emissions will be zero.

As these fantastical concept pictures show, there would be nothing like the city of Neom anywhere on the planet.

Which is no surprise.

The sci-fi architecture — often reminiscent of futuristic 1982 film Blade Runner — is indeed influenced by the masters of Hollywood special effects. 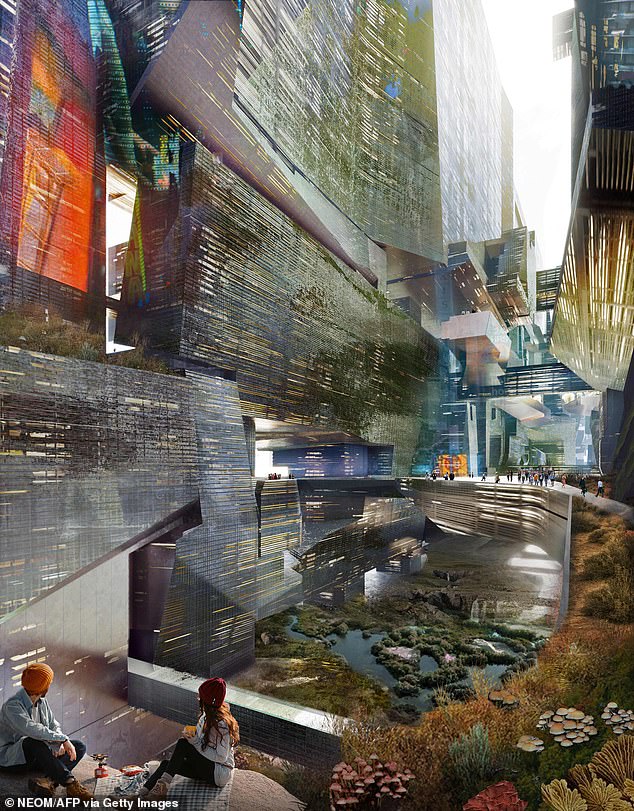 The 105-mile long monolith will boast a stadium up a mountain, a ski resort of a Jurassic Island

Throughout history, megalomaniac dreamers have sought to rival the ambition of Egyptian pharoahs and build their own equivalent of the great pyramids with varying degrees of success.

Now it is the turn of Saudi Arabia’s Crown Prince Mohammed bin Salman Al Saud with his plans to create Neom.

And it is already struggling to take shape in one of the world’s most barren places.

Detailed plans were unveiled this week for this vast metropolis and, with a price tag estimated to rise as high as $1 trillion, it is clear that they are getting ever more outlandish.

The big question, even with his country’s $620 billion sovereign wealth fund, not to mention the world’s second largest proven oil reserves to play with, is whether his vision is just too fantastical ever to be realised. It would be the biggest structure ever built — but could it become history’s most epic folly?

bin Salman presides over an authoritarian regime that routinely jails, tortures and murders opponents — notably the journalist Jamal Khashoggi in 2018 — but MBS, as he’s known, has tried hard to be seen internationally as a reformer and moderniser.

And it doesn’t get much more modern than Neom, an amalgam of the Greek word for ‘new’ and the Arabic word for ‘future’. 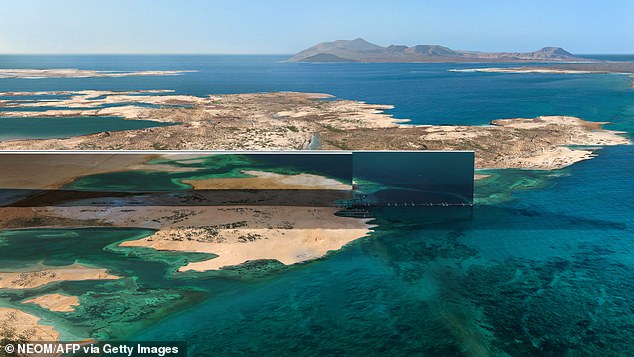 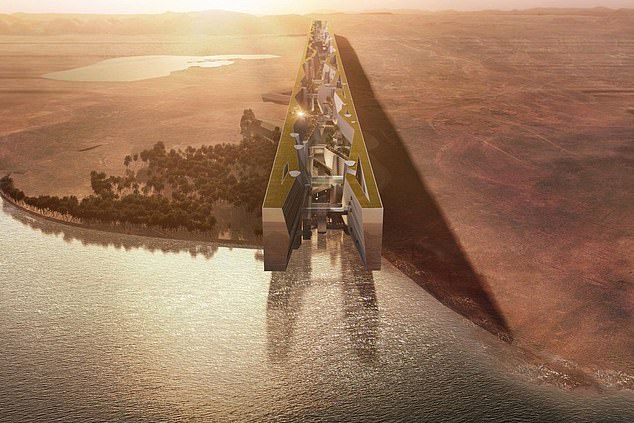 Mohammad bin Salman reportedly told his advisers: ‘I want to build my pyramids’

Announced in 2017 by the prince, Neom is the flagship project in a masterplan to diversify Saudi Arabia’s oil-dependent economy as the world increasingly turns to greener energy alternatives.

Five years on, Neom — which MBS insists must be finished by 2030 — has been plagued by setbacks as an army of workers and advisers struggle to cope with his mercurial temperament and ever-changing ideas.

MBS, 36, reportedly found the site for his dream city in Saudi Arabia’s remote province of Tabuk, after landing there in his helicopter. ‘I want to build my pyramids,’ he told advisers. He has already built a palace there.

But at least the pyramids were grounded in what was achievable at the time. An internal ‘style catalogue’ for Neom seen by Bloomberg News includes flying lifts, an urban ‘spaceport’ and buildings ‘shaped like a double helix, a falcon’s outstretched wings and a flower in bloom’. Neom will also feature a ski resort, The Vault, built into a man-made valley created by blowing a chunk out of a mountain (in winter, even in the desert, mountain-top temperatures plunge, so making fake snow outdoors is possible).

A yacht marina is planned for the Red Sea to lure holidaymakers who might otherwise have gone to the French Riviera.

MBS is a sci-fi fan and the Neom team has commissioned work from, among others, designers who created the look of the Guardians Of The Galaxy and Dark Knight Batman films, as well as a futurist who worked on the dystopian zombie movies World War Z and I Am Legend. Chris Gray, a California writer, says he was hired to research the ‘aesthetics’ of key sci-fi films and books, including Blade Runner. 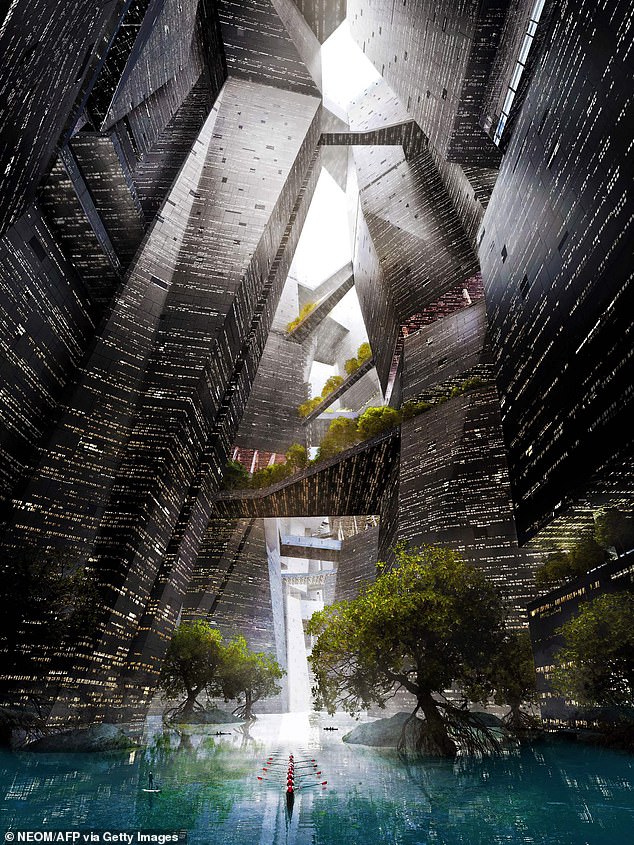 The glittering centrepiece of Neom will be The Line, an elongated ‘linear’ city 33 times the size of New York. Situated close to the borders with Jordan and Egypt, it will stretch from desert in the east to the Red Sea in the west. The Line, which is being designed by cutting-edge U.S. firm Morphosis Architects, is actually two tall buildings running parallel, connected by walkways. It will be just 656ft (200m) wide. They will have mirrored surfaces and rise up to 1,640ft (500m) above sea level — taller than the Empire State Building.

Neom will have 14 industrial sectors, including energy, media and food production, and two robots for every one citizen.

Challenges remain, not least the amount of shadow that will be created by the parallel buildings. Neom planning papers concede that lack of sunlight could damage the health of some inhabitants.

Gardens and parks, plus a huge sports stadium 1,000ft up where robots could some day wrestle in cage fights, will be housed between the parallel buildings.

The Line is so long that even the curvature of the Earth — about eight inches every mile — has to be considered, so a gap will be left at intervals to ‘bend’ The Line where necessary. A high-speed rail link running under The Line will allow passengers to get from one end of the city to the other in just 20 minutes. An alternative transport method will be those flying taxis.

MBS has hailed The Line as ‘a civilisational revolution that puts humans first’. But foreign investors, who he’s keen to attract, have made clear his regime’s human rights record hardly encourages optimism in his compassion. 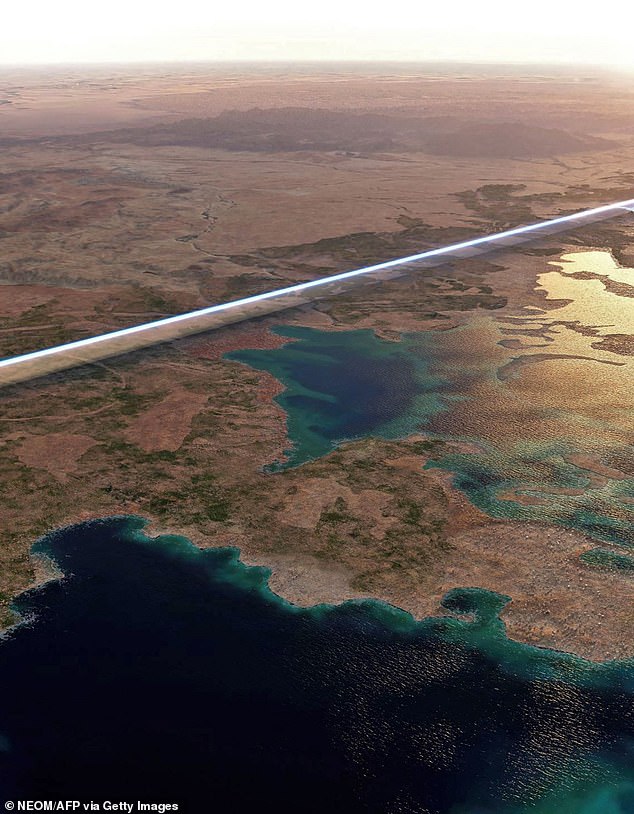 MBS says Neom will be a test bed for new technologies that could revolutionise urban life. Despite the region having almost no fresh water and temperatures that soar above 100F, its planners pledge that Neom’s citizens will live in harmony with nature. Desalination plants will process water from the Red Sea and the baking sun will provide solar energy to a fully renewable electric grid.

Cloud seeding, a technology designed to create rain by modifying the weather and outside temperature, will cool the city and water the crops that will provide fresh produce.

So-called ‘smart’ technology is capable of independent action and pretty much everything about Neom will be smart. The vegetables that will grow vertically from the sides of buildings will be ‘autonomously harvested’ by robots and transported to ‘community canteens’. Residents will pay a subscription for breakfast, lunch and dinner.

Neom will feature experimental technologies including, in a $5 billion partnership with a U.S. company, the world’s largest green hydrogen production facllity, exploiting the area’s solar and wind power. Other innovations include a Jurassic Park-style island of robot dinosaurs, advanced surveillance systems using drones and microphones to ‘guarantee the safety of the inhabitants’ by monitoring their every move, and holographic teachers ready to teach on demand in schools. 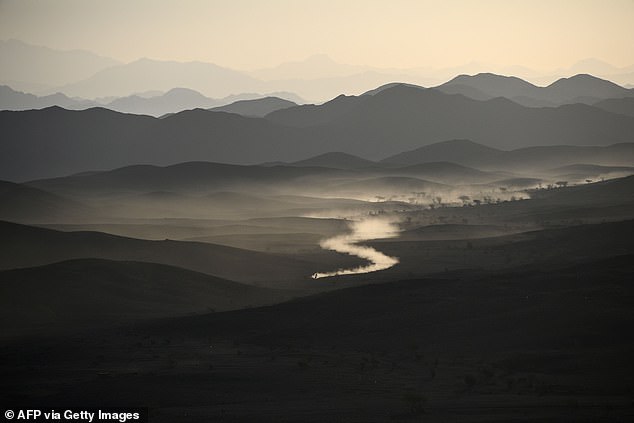 MBS even wants a beach where the sand glows in the dark. A giant artificial moon would light up each night and might even live-stream images from outer space.

Insiders say the money being hurled at Neom is jaw-dropping even by Saudi standards, much of it lavished on consultants whose ideas often survive only a week or two before being binned.

For instance, Silver Beach, a seaside community for at least 50,000 people, was inspired by the Cote d’Azur and designed by an Italian firm that specialises in creating superyachts. Instead of sand, the beach would have been crushed marble because it would shimmer silver in the sun. Sources say it was scrapped as it wasn’t considered sufficiently ‘distinctive’.

Given Saudi Arabia’s shortage of homegrown engineering and design talent, vast sums are being splashed out on attracting thousands of foreigners with $1 million tax-free, expenses-paid annual salaries for the most senior.

The project has been plagued by delays caused by the pandemic, recession and the reluctance of foreign investors to do business with the repressive Saudi regime. But the biggest headache has been the exodus of foreign staff who have despaired of MBS’s ever grander vision, not to mention his country’s human rights record. 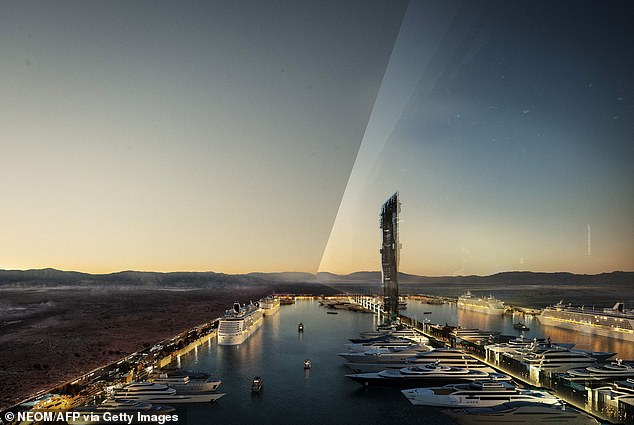 Given Saudi Arabia’s shortage of homegrown engineering and design talent, vast sums are being splashed out on attracting thousands of foreigners

With MBS demanding daily updates and interfering in ever small details, the reportedly volcanic temper of Neom chief Nadhmi al-Nasr and his failure to rein in MBS’s fantasy has prompted dozens of senior staff to resign.

‘We couldn’t even estimate the build cost,’ said a U.S. hospitality expert who fled a job working on the ski resort after only five months. ‘We were hanging buildings on the side of cliffs and we didn’t even know the geology.’

Another stumbling block has been over the 20,000 tribespeople the government plans to relocate. Some have been saying they won’t be removed from ancestral lands: one who refused to back down was denounced as a ‘terrorist’ and killed by Saudi special forces.

Dubai has shown that modern cities can emerge from the desert in years — but sceptics wonder whether Neom may prove to be beyond even the vast riches and vanity of the Saudi royal family.