THE View fans were treated to an extremely shady moment between Sunny Hostin and Joy Behar during Wednesday’s episode.

It’s not the first time the costars have had it out on the show.

During Wednesday’s episode of The View, the panel of hosts was discussing the ongoing legal battle surrounding January 6.

Joy said during the discussion she was unconvinced that Donald Trump, who is at the center of the scandal, will be prosecuted.

Cohost Sunny hit back with a bit of snark, saying: “You don’t believe that he’ll be prosecuted? Even though I’ve been saying it for a couple months, Joy?”

With a laugh, Joy replied: “You know I have the highest esteem for you, my dear, and I believe you, but in my gut, I say to myself, ‘he’s such a snake he’ll find a way out of this.'” 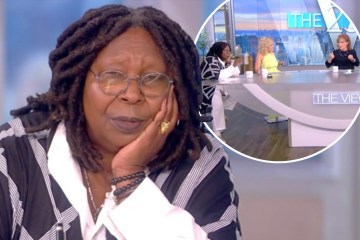 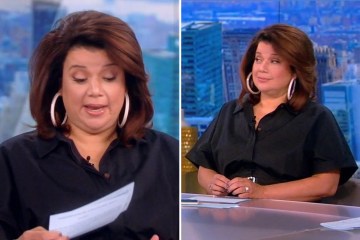 That moment wasn’t the only one that caught viewers’ eyes during Wednesday’s show.

At another point in the episode, the panel was discussing the Choco Taco, a novelty ice cream bar that was recently discontinued.

Fans immediately began to notice how “bored” Whoopi Goldberg looked throughout the whole discussion, noting how she barely participated and appeared like she didn’t want to be there.

Then the discussion turned to the hosts being scared of both home intruders hiding in the dark areas of their houses and also possibly being followed while out driving alone.

Despite her co-workers opening up about their fears, fans were shocked to see that Whoopi continued to look like she was bored by the whole conversation.

At one point, she simply laid her head down on her hand and sarcastically egged her co-hosts on.

As the segment continued on, the moderator started to completely check out from it and began playing around with her laser pointer, stunning viewers even more with her behavior.

One confused fan of The View asked: “Wth is Whoopi doing?”

Others agreed that Whoopi was acting “kinda weird” throughout the whole middle of the show.

“Whoopi, we know you hate being on The View,” one stunned viewer wrote. “But rolling your eyes and playing with a laser pointer today was beyond insulting to your co-hosts.”

A second said: “What is wrong with Whoopi Goldberg?

“Rolling her eyes & then staring into space…She’s getting paid a fat check for nothing.”

That’s not the only controversy surrounding the show in recent days.

The show issued an apology to Turning Point USA after the conservative non-profit issued a cease and desist to the talk show.

Whoopi and Joy both were accused of making false statements on air this week.

Turning Point USA, which seeks to teach young people conservative values called out the hosts for making comparisons to neo-Nazis.

“On Monday we talked about the fact that there were openly neo-Nazi demonstrators outside the Florida Student Action Summit of the Turning Point USA group,” said co-host Sara Haines.

“We want to make clear that these demonstrators were gathered outside the event and that they were not invited or endorsed by Turning Point USA.”

Haines added that a spokesperson for TPUSA said the group “100 percent condemns those ideologies” and they tried to “remove the neo-Nazis from the area but could not because they were on public property.”

“Also, Turning Point USA wanted us to clarify that this was a Turning Point USA Summit, and not a Republican Party event. So, we apologize for anything we said that may have been unclear on these points,” said Haines.

However, the group wants to hear an apology from a specific person.

“Whoopi is the one who said it. She should be the one to offer the apology,” said a spokesperson to Fox News Digital following the apology.