TOWIE is set to return to screens in August.

And on Monday, Amy Childs, 32, had fun on a bouncy castle while James ‘Diags’ Bennewith, 31, got pied as they filmed scenes at an adventure park for the upcoming series for the ITVBe show.

Diags was in costume as a clown, wearing a plaid suit jacket with orange and bright green trousers, and completing his look with an oversized red bow tie.

Chloe Brockett was also getting in on the action, stepping out in a one shouldered green top and matching pair of sleek trousers.

Birthday girl Courtney stunned in a gorgeous white mini dress and knee-high boots, and added a pop of colour with a vibrant orange wrap belt. 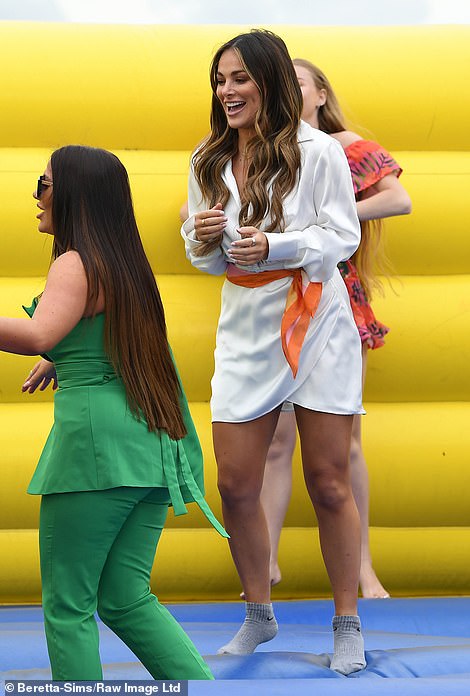 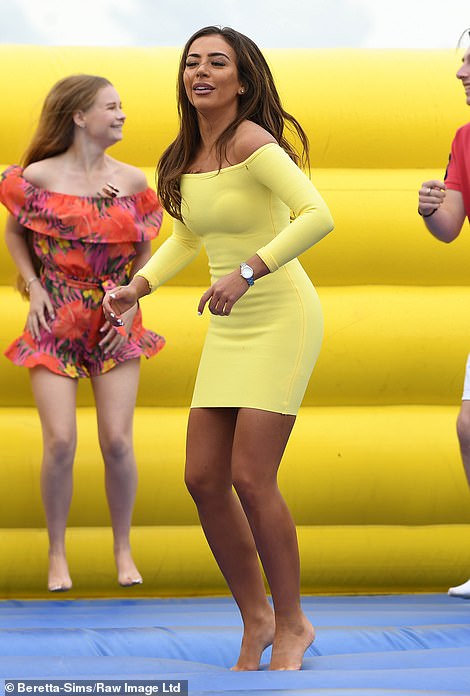 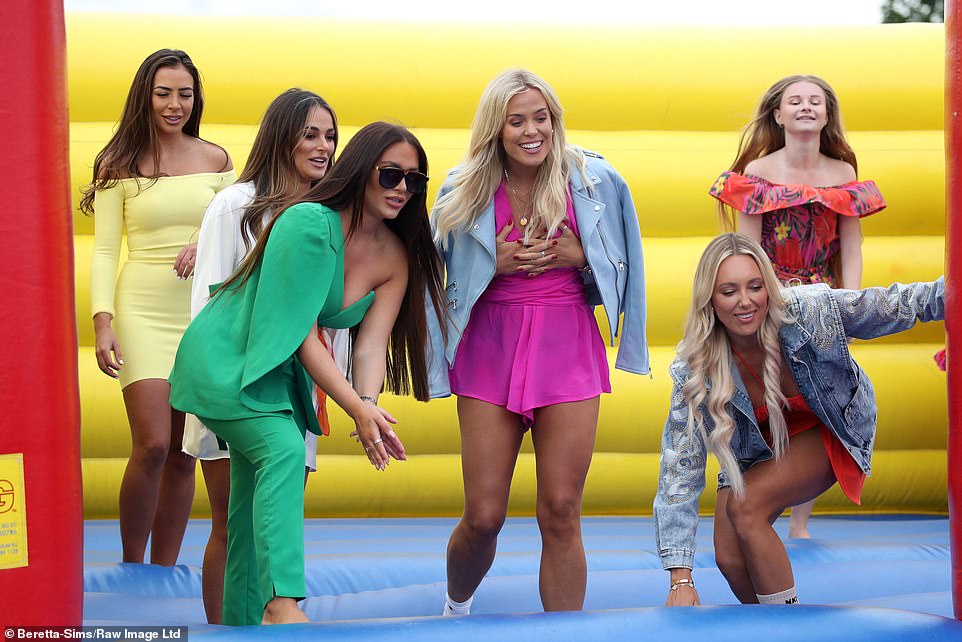 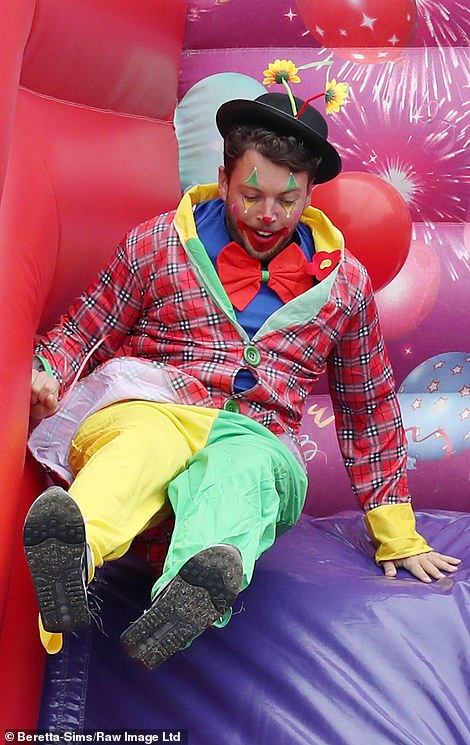 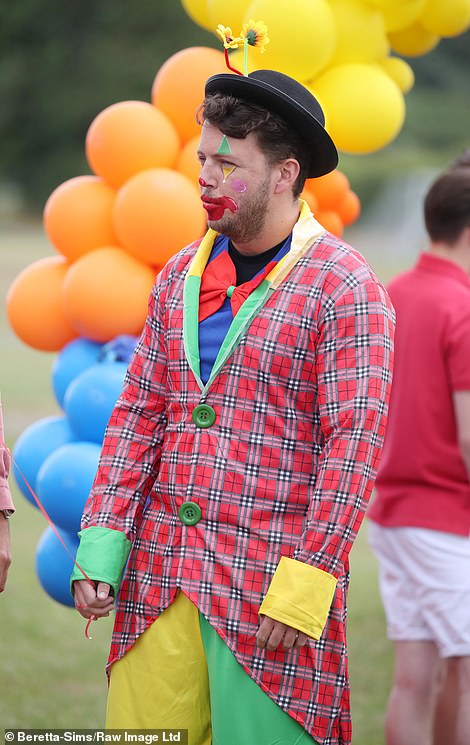 Legend: Care-free Diags had fun playing around on the inflatable slide 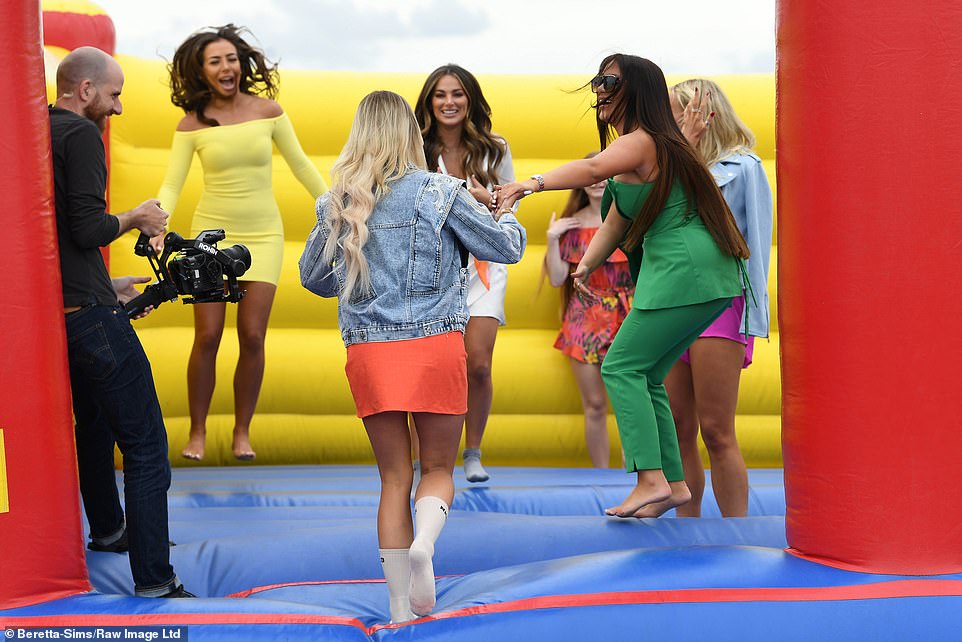 Action! The girls got Amber Turner involved on the bouncy castle as the cameras rolled

The new series of TOWIE comes as longtime castmate Chloe Sims, 40, quit the show and signed an OnlyFans TV contract with her sisters that’s set to be worth £1 million.

Chloe, her co-star siblings Frankie, 27, Demi, 25 signed their new TV contract – but have insisted there will be no explicit content.

The series – which has the working title of House of Sims – will also feature their brother Charlie, 30, and his new makeup artist fiancée Georgia Shults, 30.

Their initial deal with the OFTV platform is a ‘six-figure’ sum set to rise to millions with extra add-ons and earnings, MailOnline has been told.

The new show starts shooting within weeks and is slated to be broadcast around the start of next year on the free viewing app. 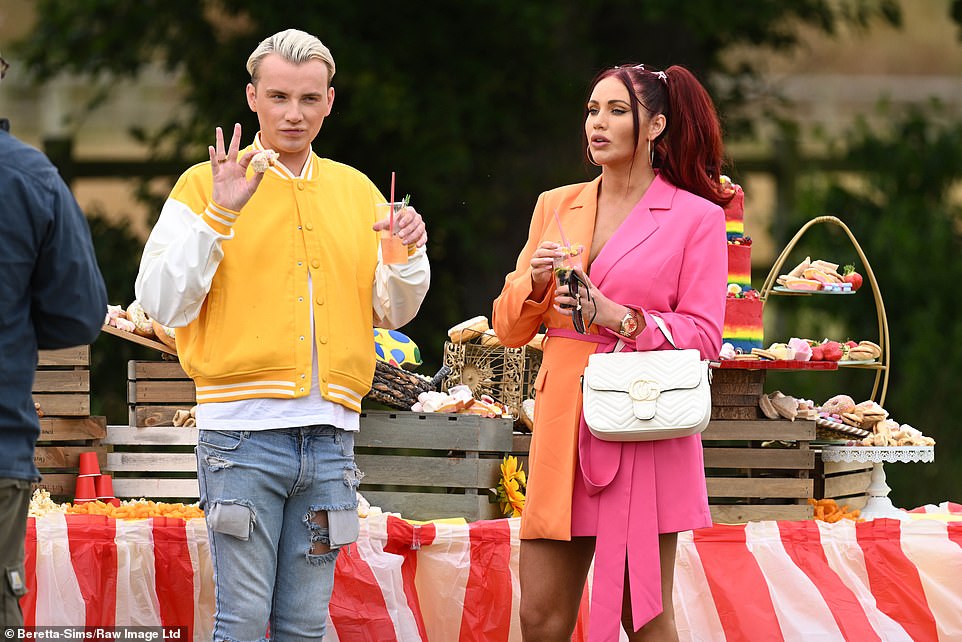 Taking a break: Harry and Amy tucked into a yummy looking spread of treats 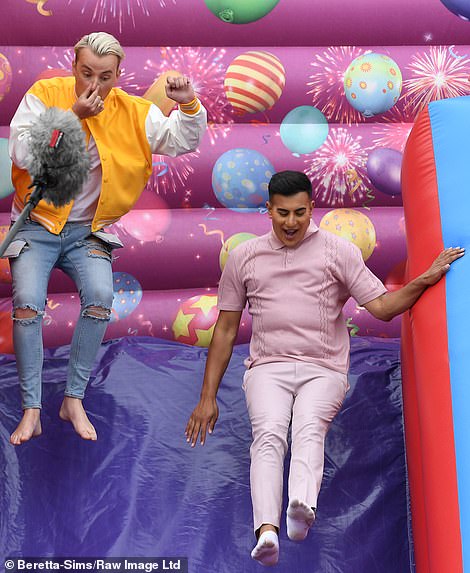 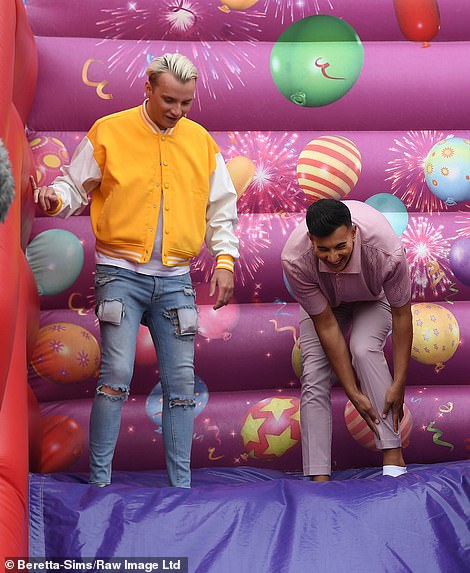 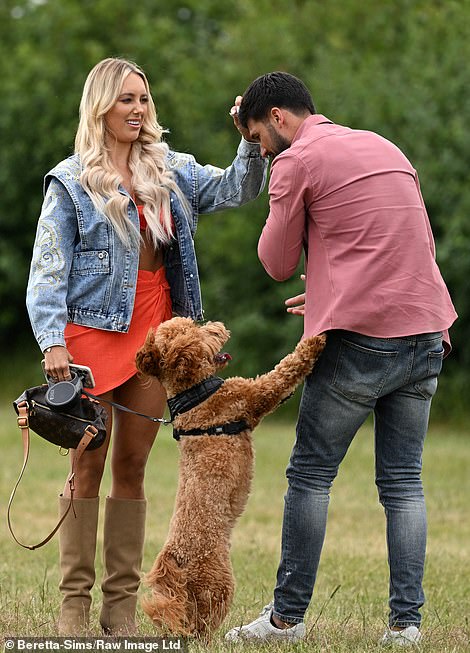 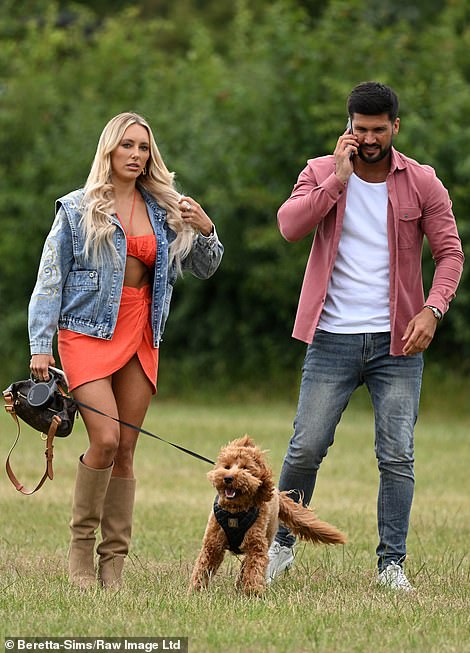 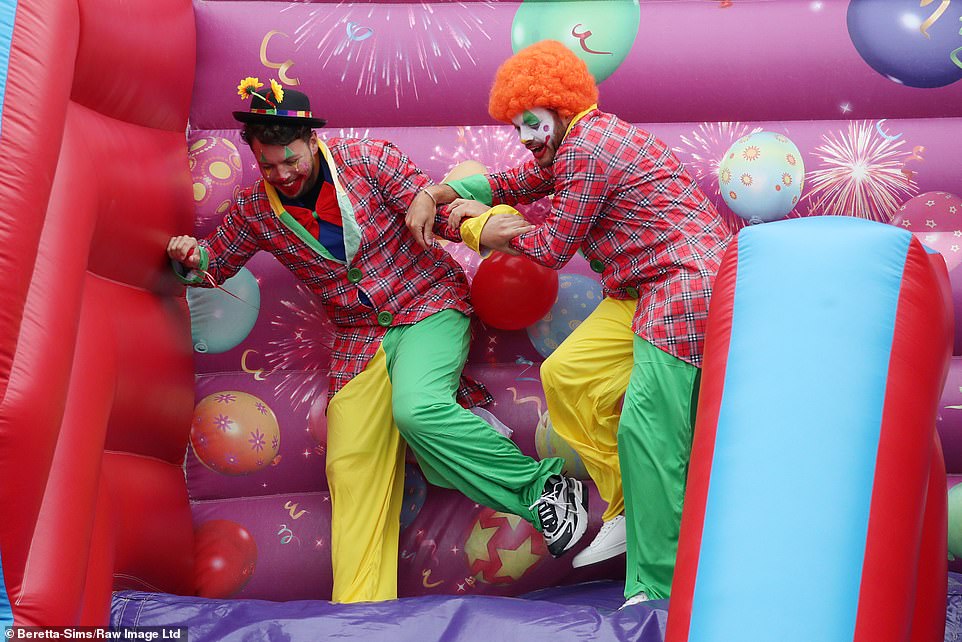 Easy! Jordan attempted to push Diags down the inflatable slide 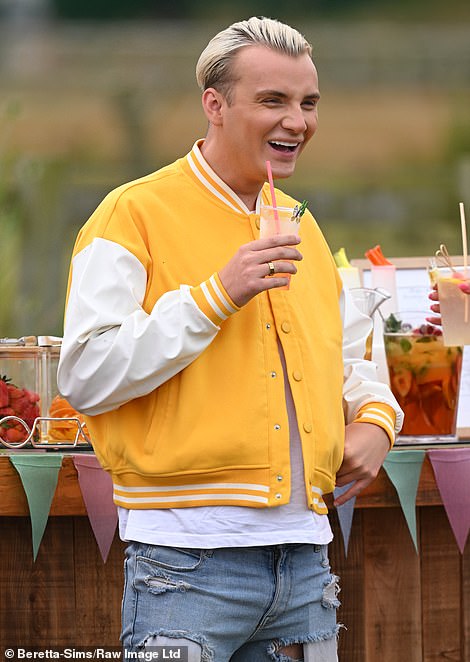 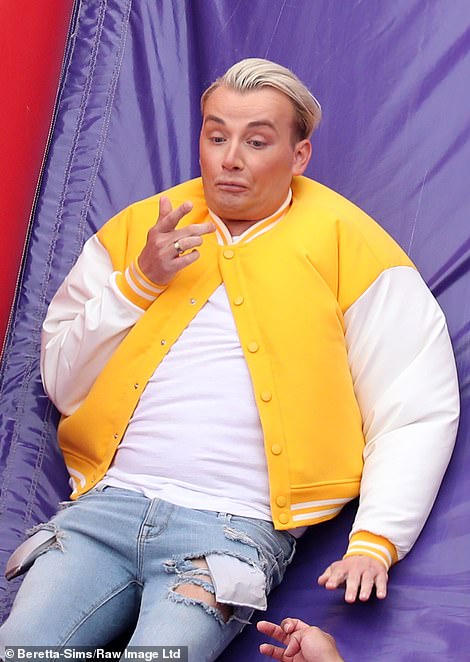 Happy: Harry sipped on a beverage before having fun on the kids style inflatables 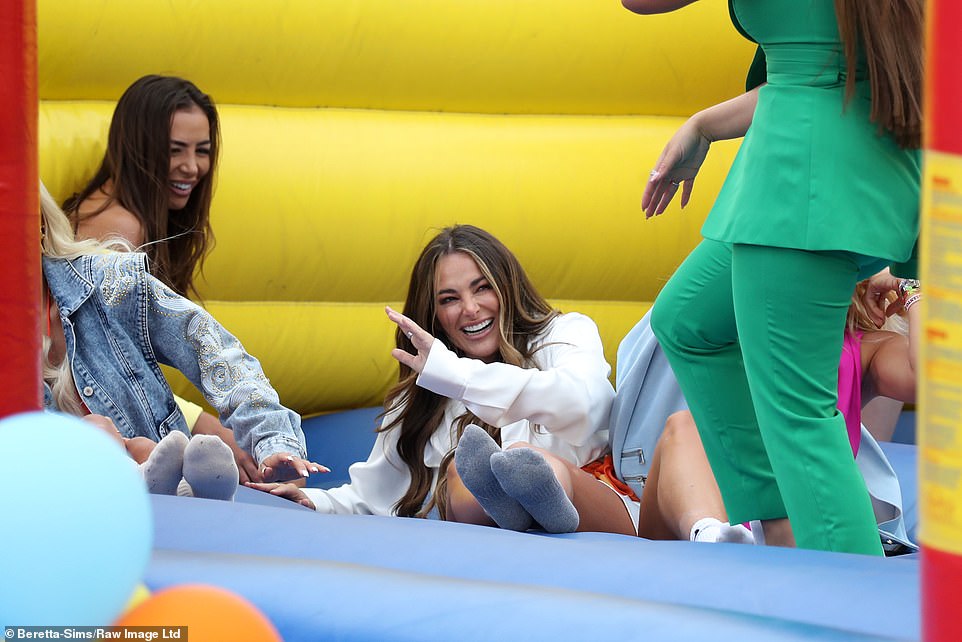 Hilarious: Birthday babe Courtney fell about laughing with her pals 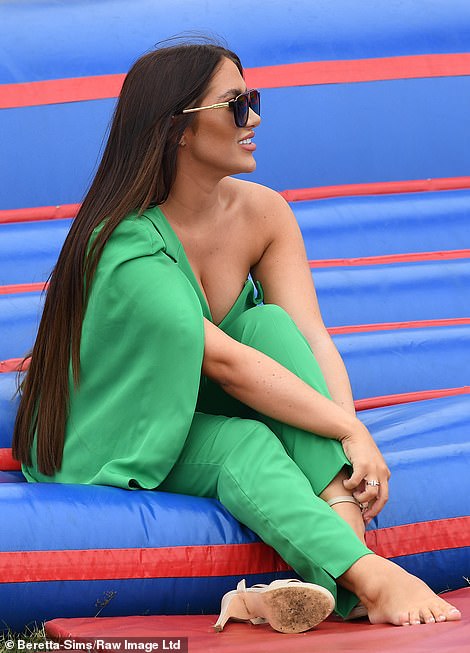 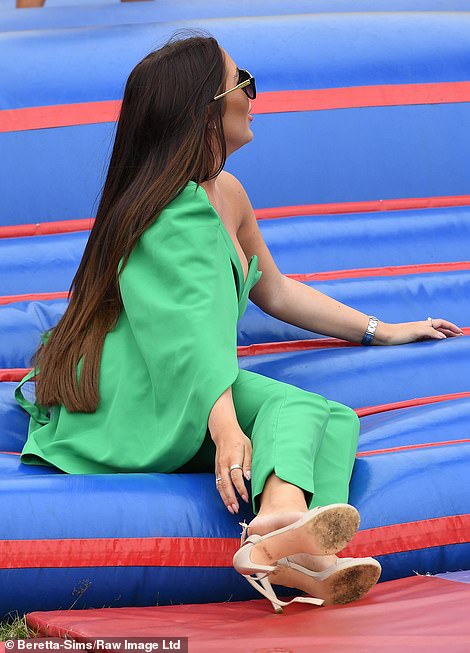 Glam: Chloe Brocket looked elegant in her statement green ensemble as she took a break

The series will go out on the free OFTV app, which unlike the parent site features no nudity and can be watched on a smart TV.

And as part of the deal the family will also open OnlyFans accounts, but will feature Instagram-style pictures, with no explicit content.

Chloe told MailOnline: ‘I get people will want to compare this to TOWIE, but this is a different concept; this will be a fly-on-the-wall insight into our lives as a family, currently calling it House of Sims as a working title. It will be completely real, and we’re really excited to bring our viewers along on a big unfiltered adventure.

‘We’re proud to be The Sims, but being compared to the Kardashians all the time is a big compliment to us as a family. We want to see where this new show can take us and plan to go global.’

Chloe, who is also a co-producer of the show, added: ‘We want to become one of the best reality TV shows out there. OFTV is fully supporting us with this. We can’t wait to get started. 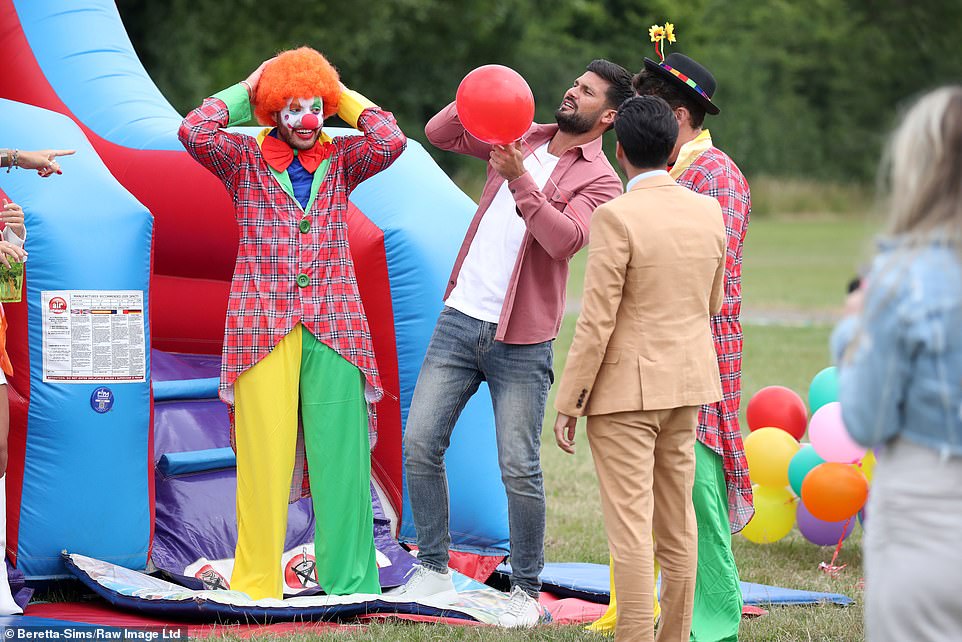 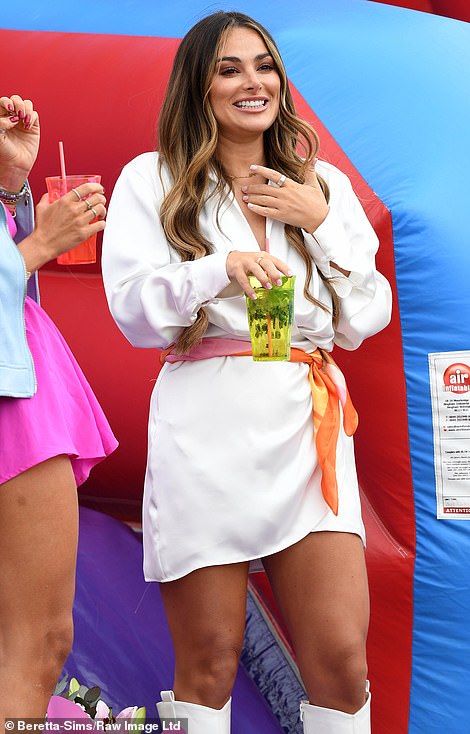 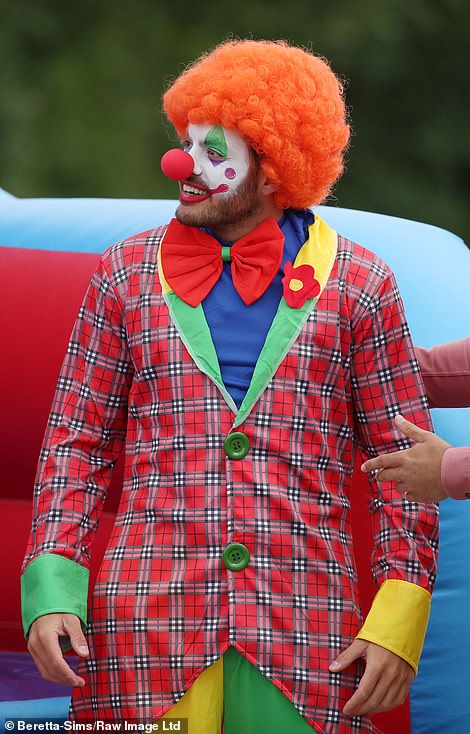 Party time! Chloe was glowing in her white ensemble as she was entertained by her pals 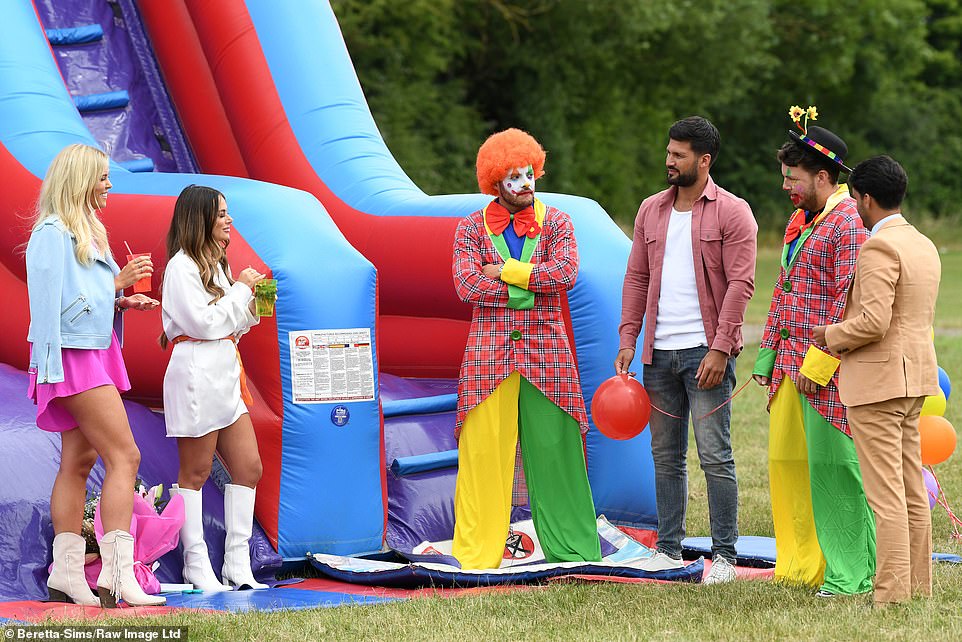 Group chats: Chloe and Courtney chatted with their male castmates 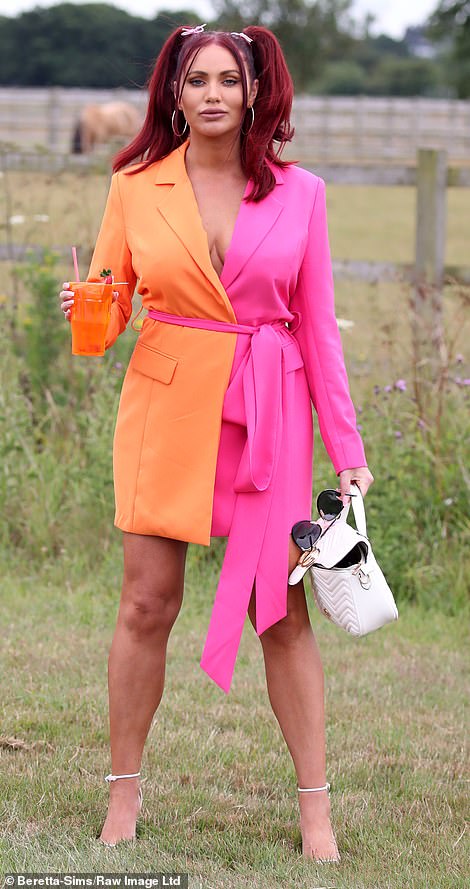 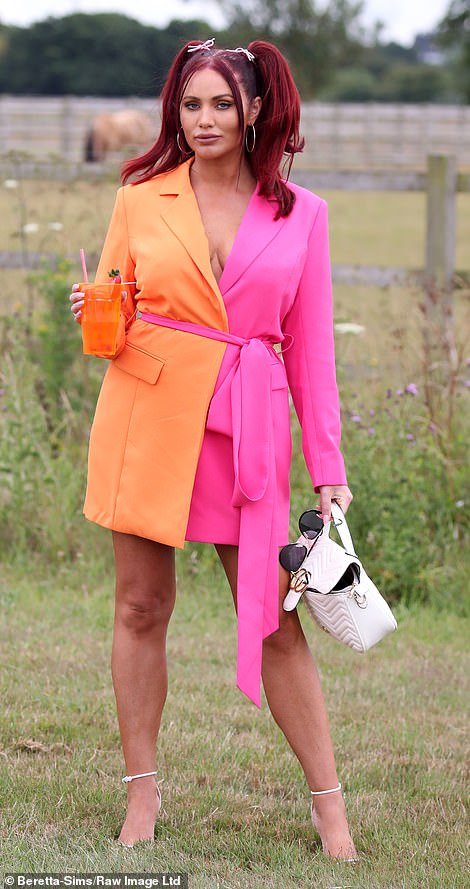 ‘I feel very strongly that we should show ourselves in a natural light, showing all aspects of everything we do.

‘For example – first thing in the morning without the glam, sharing more of who we actually are, what we’re up to, and real life situations – this is the first authentic insight into our everyday

Frankie and Demi added in a statement: For fans this is a real behind the scenes look at what goes on in our lives.

‘Fans will get to properly know all of us in a totally new show format that we’re really excited about.

‘They will understand straight away why we moved to OnlyFans when they see what we’ve up to on OFTV soon.’ 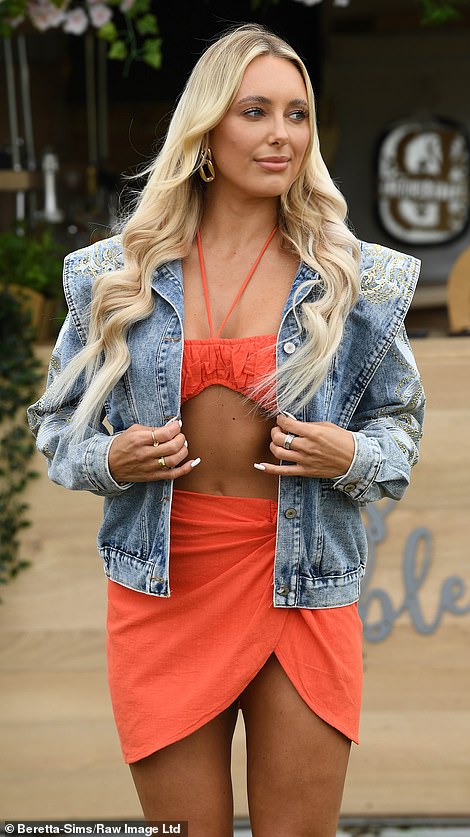 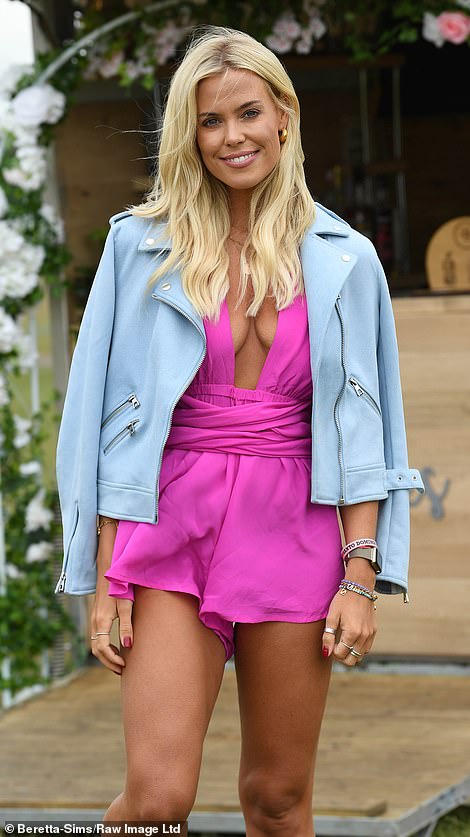 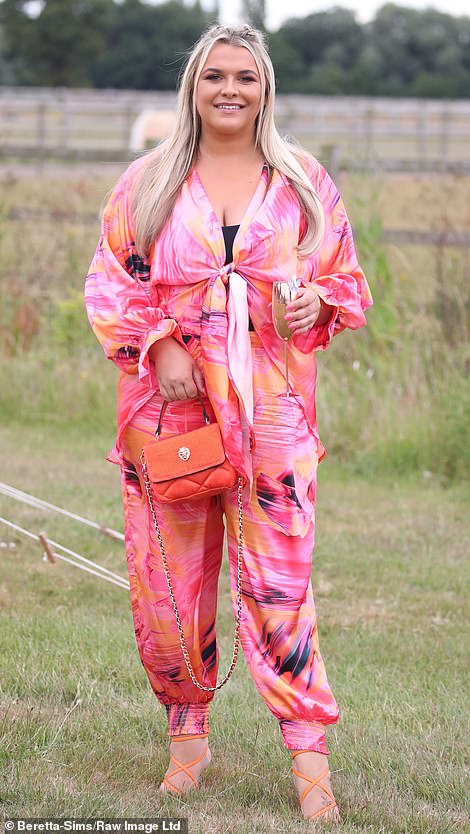 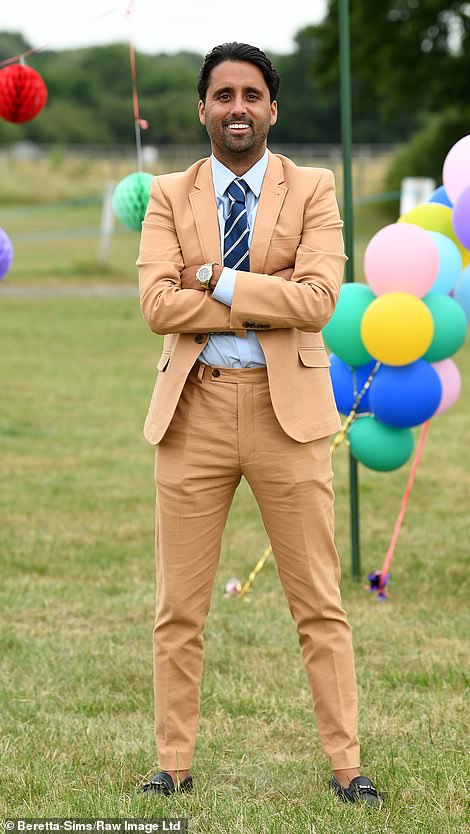 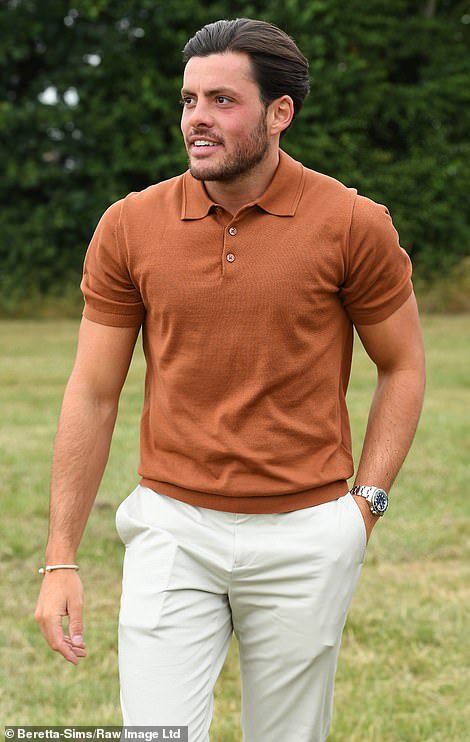 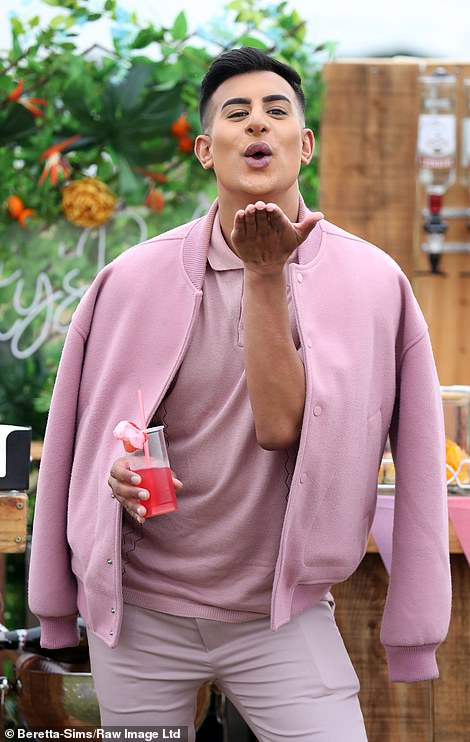 Bringing the drama: Jordan showed off his handsome face while in his tan coloured polo shirt, while Junaid blew a kiss to the photographer