Cincinnati Bengals kicker Evan McPherson hits a RIDICULOUS 65-yard field goal to end practice during preseason training camp… as he warns rivals he’s not done there!The Bengals kicker is looking to continue his form which made him a heroTwo clutch kicks in last years playoffs helped the Bengals reach the Super BowlHis kicks beat the Titans in the Divisional, then the Chiefs in the AFC title game

By Jake Fenner For Dailymail.Com

The man they call ‘Money Mac’ in southern Ohio isn’t resting on his laurels earned during the Cincinnati Bengals magical run to the Super Bowl.

Bengals kicker Evan McPherson made sure the team ended Saturday practice in style by knocking a 65-yard field goal attempt through the uprights.

Nearly 30,000 fans packed into Paul Brown Stadium to watch the magic happen as the ball cleared the crossbar by several yards.

‘We definitely planned it to … show the fans in attendance that it’s actually possible,’ McPherson told reporters.

‘On a nice, warm day like that the ball’s compressing really well, and I just hit that ball really well.’

If that kick attempt took place in an actual game, it would go down as the second longest in league history.

McPherson would be just one-yard short of Baltimore Ravens kicker Justin Tucker, who made a 66-yard field goal to win a game at Detroit’s Ford Field last season.

When asked if making anything longer was possible, a confident McPherson replied: ‘I mean, I think we showed it today.

‘If the situations were right at the end of the half or the end of a game, I think we’re comfortable from 68, around there. Indoor, it’s more 65-66.’ 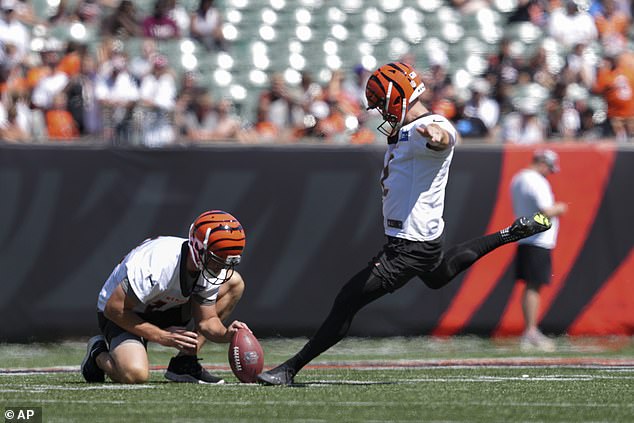 The ex-Florida Gator had a rookie season to remember, one that could go down in the history books as the best first season a kicker has ever had.

He hit 84 percent of field goal attempts during the regular season, including a career-long 58-yarder.

McPherson also went 46 of 48 on extra point attempts, to score a total of 130 points in the regular season. 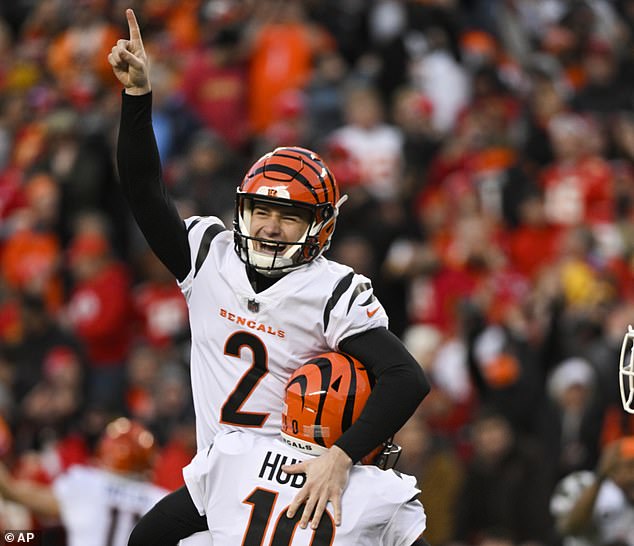 However, it was in the postseason that McPherson shone the brightest – going perfect on field goals and extra points across four games, including Super Bowl LVI.

The 14 field goals he hit in the post season tied the record for most made in the playoffs, initially set in 2006 by then-Colts kicker Adam Vinateri.

Two of those field goals pushed the Bengals deeper into the playoffs.

First, in the AFC Divisional round against the Tennessee Titans, his 52-yard field goal as time expired won the game for the Bengals 19-16.

Then, in overtime of the AFC Championship game, McPherson’s 31-yard chip shot was enough to move on to the Super Bowl.

That kick also won the Bengals their first conference championship since 1988. 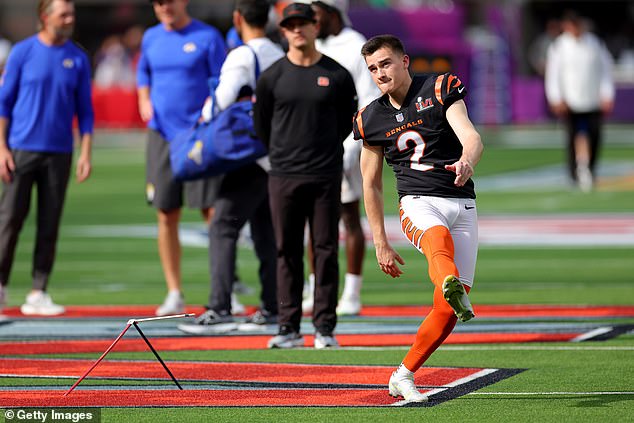 Despite a perfect kicking performance, McPherson and the Bengals lost Super Bowl LVI